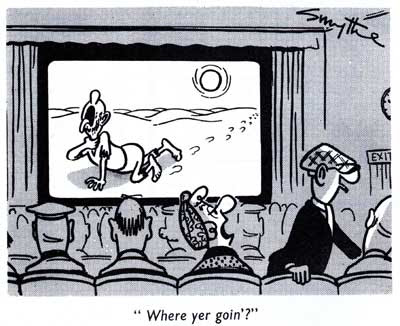 While resolution is not high quality, the archive offers a pay per view opportunity to read some of Britain's best newspaper strips such as Jane, which began in 1932. by Norman Pett and whose artists during its run include John M Burns; the recently revived science fiction and fantasy adventurer Garth, which began in 1943 and was drawn by the likes of Frank Bellamy and Martin Asbury; and humour strips such as Andy Capp by Reg Smythe, The Fosdyke Saga by Bill Tidy and the ever wonderful The Perishers by Maurice Dodd.

Further back in time are strips such as the 1920s strip Pip, Squeak and Wilfred, written by Bertram J. Lamb and drawn by Austin B. Payne, which was one of the first British comics to gain a huge fan following, the Wilfredian League of Gugnuncs; Ruggles, written by Frank Dowling and Ian Gammidge, drawn by Steve Dowling, which lasted from March 1935 until August 1957; and Humours of History by Arthur Moreland, one of the first strips published by the Daily Mirror.

Comics creator Lew Stringer has given the archive a guarded thumbs up in a review for his Blimey! It's a A Blog About Comics, although he notes that the search function doesn't seem to allow you to run through issue by issue, which means reading consecutive strips is difficult. (I found the basic search facility offered to those who don't register is pretty uelsess).

"I found one way of doing it, by advancing the date in the URL, but it's a laborious process and doesn't always work," he comments. "(Some issues seem to be missing, or perhaps there's a technical glitch.)

"Clearly the site is aimed more at people searching for specific reference keywords in articles rather than following daily strips," he notes. "However, it is fascinating to find old Mirror strips by putting in a search for The Flutters or [private investigator] Buck Ryan for example within certain time periods. Some pages are more pixelated than others, and the linework of strips isn't as smooth as should be, but they're still legible."

UK Press Online explains that the “pre-computer” pages in UKPressOnline – from 1900 to 2001 – are scanned from the original paper editions and have been ‘OCR’d’ (Optical Character Recognition) to make the text available, so images are dependent on the quality of the original. It also means the originals have probably not been scanned at a very high resolution since they are intended only for online viewing.

• UKPressOnline subscriptions are designed primarily for Education and Library institutions on annual contract, but Personal access is also available by short-term, monthly and annual contract. While many newspapers have now made their archive free to view, 48 hour personal access to the site costs £5.

• The full Daily Mirror archive 1903-current is presently restricted to Education and Library institution users. The Daily Express 20th Century archive is now under construction (180,000+ pages increasing daily) and is being offered free with Express Group 21st Century access (May2000 - current) until complete.

Hi John, Just a couple of updates: although part of the site says the Mirror archive is only available to Education and Library Institution users, that's not the case as I had no problem accessing it with a Personal account.

The other thing I discovered is that there is a simple way to read the papers in consecutive order. In the Advanced Search option, put in the dates of the issues you're interested in (eg: 22/03/1969 to 31/06/1969) and tick the "By date alone" box and that should bring up the newspapers in order.