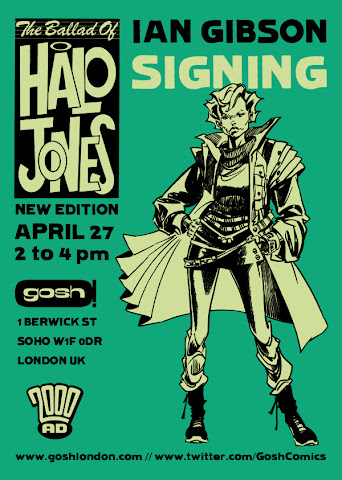 Ian Gibson’s work with Alan Moore on The Ballad of Halo Jones is lauded as some of the legendary weekly comic book’s greatest.

And to celebrate the latest edition of Halo Jones, complete with a new introduction by Zoo City author Lauren Beukes, Gibson will be signing at Gosh Comics on Berwick Street in London from 2pm to 4pm on Saturday 27th April.

The new UK edition of The Ballad of Halo Jones, due for release in May 2013, will have a brand new design-led cover by 2000AD head designer Simon Parr.

Dubbed “possibly the first feminist heroine in comics” by The Observer, the ground-breaking series introduced readers to a poignant, fascinating, and at times heartbreaking story of an ordinary woman who lives an extraordinary life.

Set in a future where the unemployed are herded into the Hoop, a floating ghetto off the coast of Manhattan, Halo is a young woman who dreams of escaping her boring life. When she gets the chance to do so aboard a luxury space cruiser as a hostess, it catapults her into an uncaring galaxy that will take her from the lap of luxury to a time-bending war of atrocity.