Enter The Englishman - from Eco Comics 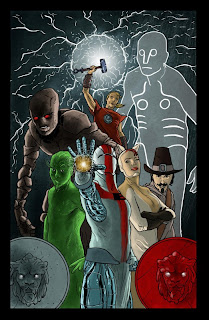 Eco Comics has been celebrating St. George’s Day by announcing its next comic book series, Englishman, written by Chris Bunting and illustrated by Valentin Ramon.

It will be a paperless-exclusive title from the award-winning 'green' publisher.

"I often feel quite envious of the patriotism that so many other countries display, but 'England' has almost become a forgotten, even a dirty, word," Bunting says. "To paraphrase the historian David Starkey, we should celebrate, and not be ashamed of, England.

"To help address this, just as the US has its Captain America, I realised that England needed its own patriotic super hero: enter Englishman.

"This is the most ambitious, dark and controversial title that I’ve yet written," he continues. "But expect fun, fireworks, and my usual irreverence.

"Also, expect plenty of famous English faces to appear in comic book form for the first time - the cover preview reveals some of them. Plus, there are brand new, quintessentially English characters, including Greenbelt and Dry Stone Wall."

Further details on the Englishman project are due to be announced. The publisher states that the first issue will be in a new format previously unseen in comic books and free to download.