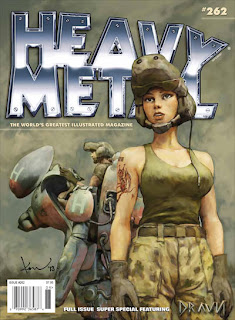 Fans are in for another themed-issue treat as Dravn is unleashed for a full-issue saga of inter-related tales where dizzying heights of storytelling mastery cross paths with unadulterated science-fantasy.

What if super-powered heroes and villains have always existed, buried somewhere under our mythology and folklore? We're not talking about capes and tights, we're talking about the real demi-gods that walked and pounded the Earth!

Created by filmmaker Jesse Negron (American Fighter Pilot, Pop & Me) and written by Negron with Dave Elliott (ATOMEKA, Monster Massacre), Dravn features characters designed exclusively by Hollywood concept artist Keith Thompson (Don't Be Afraid Of The Dark, Pacific Rim), and brought to life by artists from around the globe, including members of Imaginary Friends Studios and STELLAR Labs, to name a few.

In this epic story, history and legend get a bit twisted with characters as diverse as Camelot knights and Romanian impalers and Nazi stormtroopers all getting connected by greater forces, as super-beings stand revealed as the decision-makers and the rest of humanity left struggling with the pieces of a cosmic gambit more screwy than a primetime news headline.

Said Heavy Metal editor Dave Elliott, "I have always felt fiction is escape. Anything that takes you from where you are to someplace else is by definition escape. I think the metaphor is the most effective way of achieving that escape. By creating something that feels familiar and resonates with you it's easier to believe in and therefore a more immersive experience can be achieved.

"With Dravn we're taking you to places that you've heard of and are familiar with and subverting them. Not much different from doing an "Elseworlds" or a "What If" story but with history and myth."

Featuring an iconic choice of hyper-gorgeous covers by Kow Yokoyama, Kendrick Lim, Rob Prior, and Stanley Lau, the king-sized issue is on sale now at finer books and comics shops everywhere, as well as directly from Heavy Metal.

Dravn is set to dive across mediums, across platforms, and it all starts in the pages of Heavy Metal.

For more info, check out the official Dravn website and stalk the team at the Heavy Metal site, your home away from hell...