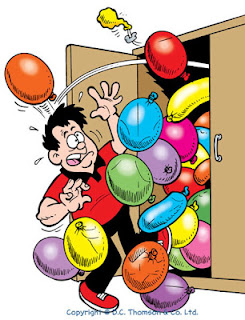 (via Lew Stringer): British comics have often featured activity pages amongst the strips, from the humble reader's jokes page, 'How to' features on magic tricks, and puzzle pages such as Teaser Time. The latest thing appears to be the pranks page, with readers actively encouraged to play harmless pranks on their parents and pals, with step-by-step instructions on each mischievous moment.

Artist and writer Lew Stringer reports that this week's issues of The Beano and BeanoMax are no exception. In The Beano he's illustrated Pop Goes the Weasel, - "and no, weasels are not involved," he says. "It's a prank involving keys and balloons."

It's a busy week for Lew watchers: over in BeanoMax, his cartoons run across five pages for the It's Prank O'Clock feature, telling kids how they can get up to 15 pranks during the course of a day.

"This week's Beano is rather special because not only does it feature the return of the cover strip (as opposed to one big picture) it also contains the debut of four new strips," Lew enthuses. His Rasher strip continues apace!

• The new Beano is on sale now in all good newsagents and supermarkets, as is a free-gift packed BeanoMax No. 77, on sale now for £3.99. More info and pictures on Lew's blog
Posted by John Freeman at 8:00 pm