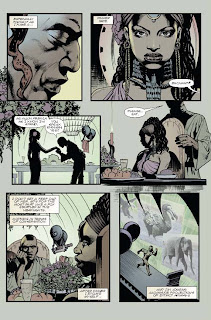 Creators Jim Alexander, John Higgins (assisted on colours by Sally Jane Hurst) and
Jim Campbell have a short story, "Eden", in the latest issue of Dark Horse Presents (#23), on sale now in all good comic shops.

Jim Alexander's publishing debut came as writer of Calhab Justice for Judge Dredd Megazine. He then went on to script Judge Dredd, Pandora and O'Rork. Recent work includes Gabriel, Scout One and for Black Hearted Press, and he recently formed a new publishing company, Planet Jimbot, with Jim Campbell (read our interview with Jim A about this venture here).

An SF tale centred on a man seeking to save Africa from environmental disaster, "Eden" a bit of a landmark for Jim Campbell, as it marks his first ever lettering for Dark Horse.

"I've been admirer of Dark Horse as a publisher since their earliest days, so this is a big deal for me. (Plus, y'know, John Watchmen Higgins.)"

Jim's lettering has graced the pages of both indie and mainstream comic titles, including the new STRIP: The Adventure Comics Magazine, where he's an invaluable part of the mix.

DHP #23 also features Dan Jolley and Leonard Kirk's supervillain tracker Clev, back out of prison to help the FBI hunt an invisible killer, Fred Van Lente and Freddie Williams II delve into a world of psychic espionage in Brain Boy, and Peter Hogan and Phil Winslade pull you into another magical dimension with "King's Road" (see news story).