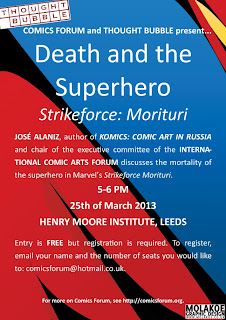 Comics Forum has announced the second event in its ‘Comics Forum presents…’ series. José Alaniz, author of Komiks: Comic Art in Russia, guest author for the Comics Forum website and the current chair of the executive committee of the International Comic Art Forum, will appear at the Henry Moore Institute in Leeds (UK) on the 25th March.

Proceeding in part from the writings of cultural anthropologist Ernest Becker, Death and the Superhero: ‘Strikeforce: Morituri’ examines the late 1980s Marvel Comics series Strikeforce: Morituri (originally written by Peter Gillis with art by Brent Anderson), which took as its premise the inescapable mortality of its superteam’s members, for a consideration of the ways “real” death warps and complicates the routinely death-denying superhero genre.

José Alaniz, is currently the Chair of the Executive Committee of the International Comic Arts Forum, the leading comics studies conference in the US. (He edited a symposium on Czech comics for the Forum in 2009).

He's the associate professor in the Department of Slavic Languages and Literatures and the Department of Comparative Literature (adjunct) at the University of Washington – Seattle, published his first book, Komiks: Comic Art in Russia (University Press of Mississippi) in 2010. His articles have appeared in the International Journal of Comic Art, the Comics Journal, Ulbandus, Studies in Russian and Soviet Cinema and Kinokultura, as well as the anthologies The Ages of Superman: Essays on the Man of Steel in Changing Times, The Cinema of Alexander Sokurov and Russian Children’s Literature and Culture

• Entry to this event is free, but places are limited so registration is required. Places will be given on a first come first served basis, and early booking is strongly recommended. To register, send your name and the number of tickets you would like to comicsforum@hotmail.co.uk
Posted by John Freeman at 7:00 pm