Dungeons, Air Aces and Phantoms - It's your latest Commandos! 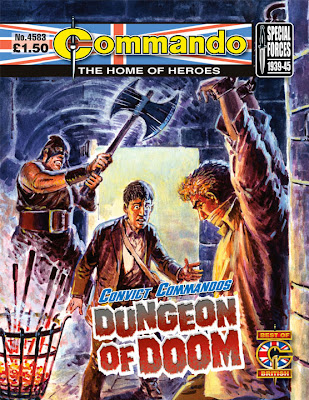 Four new Commando comics went on sale today in all good newsagents - and actually, their distributions seems to be improving, as we've spotted them in several new places recently. Here's the low down on the stories…

The four-man special force known as the Convict Commandos were in dangerous territory. They had entered neutral Spain illegally and were now deep within a castle which bristled with all sorts of perils - from Nazi interrogators to axe-wielding maniacs.

This time even they had got in too deep! 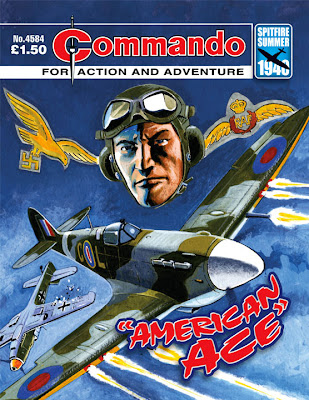 He stepped off a US freighter in Liverpool and walked straight to the nearest RAF recruiting office to join up. A natural pilot, he was at the controls of a British fighter in no time.

As his score of victories mounted in the summer of 1940, his fellow pilots never dreamed he carried a secret - one that, if discovered, could be his death warrant! 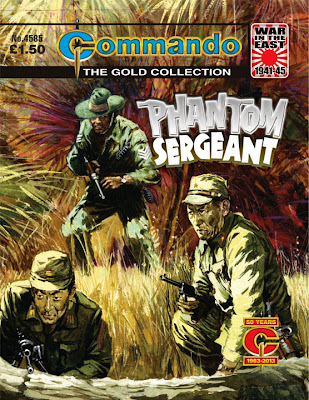 He moved like a shadow, a ghostly-quiet shape that flitted through the Burmese jungle wherever there was a Japanese soldier to be hunted, an invading enemy to be destroyed.

Many of those men did see the Phantom Sergeant, but if they did that was the last thing they ever saw…

"It's a Commando tradition that we make our stories as authentic and accurate as we possibly can," notes editor Calum Laird of this re-presented tale, "so it's probably best to admit straight away the aircraft in this tale are not quite up to the mark. Don't let that put you off, though, the tale is otherwise well drawn and the cover is particularly fine.

"The tale itself is particularly hard - especially on the Japanese. There's little sympathy for any of them in the story, written less than 20 years after the war finished.

"Still, it's a fine adventure and one I hope you'll enjoy." 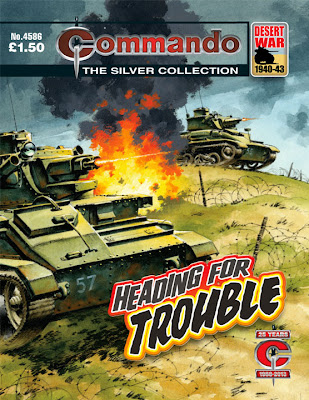 During the Second World War most officers fought gallantly alongside their men. But a few - like a certain Lieutenant Fairfax - were cowardly, incompetent and more likely to endanger their own troops than the enemy.

You can bet that any man serving under Fairfax would very soon be - heading for trouble...

"All Commando stories send the characters on a journey - whether physically, emotionally or metaphorically," notes Deputy Editor Scott Montgomery of this story, "and on many occasions this involves the journey from villain or anti-hero to hero. Heading For Trouble neatly turns this notion on its head, however. Sergeant Ian Cheam starts out as an instant, reliable Commando hero but soon his path leads towards that of a cynical anti-hero. Where will his journey end…?"

*Saving based on discounted Direct Debit price compared with shop price. First quarterly payment discounted by 50% at £12.50 and £25 per quarter thereafter. UK bank accounts only. One year discounted subscription rate of £99.