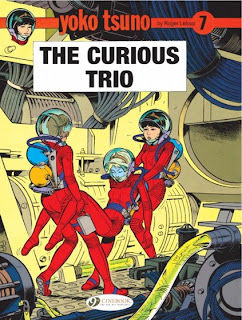 Roger Leloup's Yoko Tsuno returns in the seventh of her books to be translated into English by Cinebook, The Curious Trio, which was actually the first of the Yoko Tsuno albums published in France back in 1972.

Vic Van Steen and Pol Paris are a TV director and cameraman who, on leaving the station late at night, spot some unusual goings-on at a nearby building site where they follow a female cat-burglar into a laboratory. There they discover the 'burglar' is actually testing the lab's security and is a Japanese engineer called Yoko Tsuno who is between jobs.

Yoko accepts the job of a sound engineer from the two men and a few days later is part of a camera team shooting a documentary in an underground lake. However as they dive in the lake attempting to discover where the water exits to, they are drawn into a current and end up in an underground cavern populated by an advanced race of blue skinned humanoids. 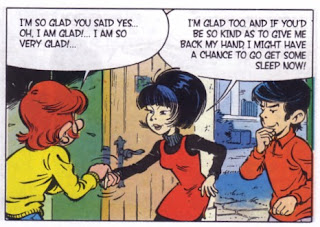 It is not unusual for Cinebook to publish their various series out of order when the stories in those series are not sequential. This origin story that introduces Yoko to Vic and Pol was first published as Le Trio De L'Etrange in the weekly Spirou comic between May and September 1971 and then combined into an album in 1972 - a further 25 have since been published. So here readers see writer and artist Roger Leloup's early versions of the now familiar characters and they are not that different - Yoko is resourceful, Vic is unshakable and Pol is the comic foil. 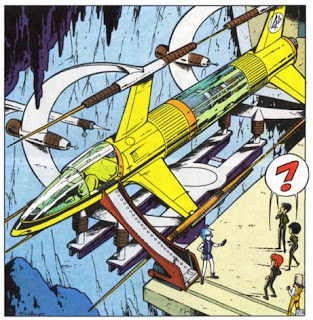 What is different is the artwork and here Leloup uses a more humorous style of art than his later ligne claire, indeed Cinebook felt the need to for a brief introduction to point out that this is the earliest book due, presumably, to the difference in art style to what they have published from the series before. While I prefer the later artwork, the art style and the science-fiction nature of this story mean that this bears quite a resemblance to the early Valerian and Laureline books that Cinebook are also currently publishing.

Like all Yoko Tsuno titles this is aimed at a slightly younger audience, late primary school girls would probably be the bulls-eye, with a relatively straight-forward tale of futuristic underground railways, sleeping aliens and a dangerous main computer. While it is not too taxing for an adult reader, it always remains imaginative and fun.

Yoko Tsuno - The Curious Trio maintains the series style of good, adventurous story telling for a younger audience and, in a market lacking in good graphic novels for younger girls, it comes especially recommended for daughters and nieces.

• There are more details of all the English language Yoko Tsuno books on the Cinebook website.

• There are more details of the original French books on the official Yoko Tsuno website (in French).
Posted by Jeremy Briggs at 7:00 am