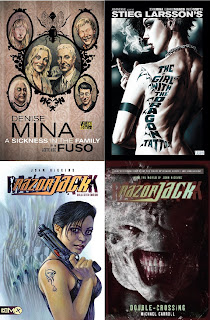 Starting a month about the links between comics and literature, radio show and podcast Panel Borders presents Swedish Thrillers and dark Sci-Fi Fantasy this coming weekend.

Alex Fitch looks at an example of a series of books that are being adapted for comics and comics that are being continued as novels. Scots novelist Denise Mina discusses her adaptation of Stieg Larsson's Millennium trilogy as a series of graphic novels for DC Comics, starting with The Girl with the Dragon Tattoo. Plus, writer / artist John Higgins explains the transition of his SF / horror comic series Razorjack into a series of books written by himself and other authors.