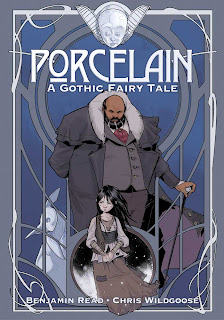 Improper Books' Porcelain: A Gothic Fairy Tale is having a limited, indie release on 27th February, and will be available from Page 45, Travelling Man, Gosh! and Orbital Comics stores in the UK.

A gorgeous-looking 96-page graphic novel, written by Benjamin Read, illustrated by Chris Wildgoose, coloured by André May, and lettered by Jim Campbell, Porcelain A Gothic Fairy Tale is set within a world that’s a darkly magical echo of our own. It follows the story of a street urchin, known as Child, who leaves the cold streets of a snowy city behind when she climbs the high wall into the Porcelain Maker’s secret garden in a bid to steal whatever she can.

The Porcelain Maker discovers Child trespassing but, amused by her audacity, he offers her the chance to stay. He’s a lonely man, kept company only by his alchemically-powered automata, and he and Child form an unlikely friendship.

Shut off from the world beyond the wall, Child wants or needs for nothing as the Porcelain Maker heaps affection and luxury upon her, indulging her like daughter. In return, she can do as she pleases, except for one command, one rule that must never be broken, she must not look behind the workshop door.

• A free digital promo of the first 12 pages of Porcelain is now available to view and download via: http://www.improperbooks.com/projects/porcelain/ - here's a few of the amazing pages... 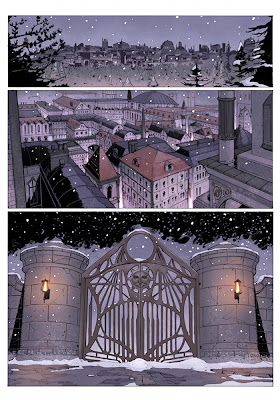 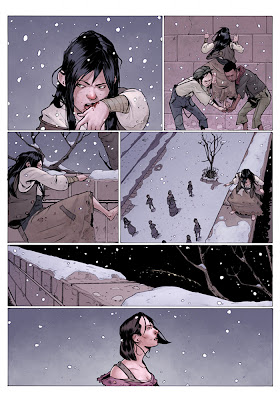 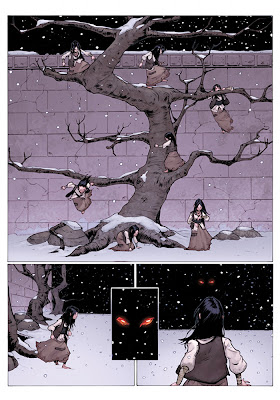 Improper Books is a comic and graphic novel imprint focusing on creator owned stories that have atouch of the fairy tale, the Gothic or the macabre.

Benjamin Read writes comics and makes films including the True Grit and Super 8 comic adaptations, and also wrote and produced the films Warhouse and 500 Miles North.