In Review: Nemo - Heart of Ice 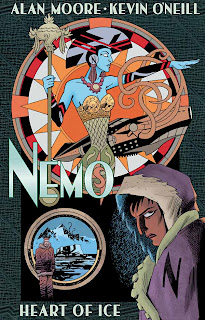 The Book: It's 1925, 15 long years since Janni Dakkar first tried to escape the legacy of her dying science-pirate father, only to accept her destiny as the new Nemo, captain of the legendary Nautilus. Now, tired of her unending spree of plunder and destruction, Janni launches a grand expedition to surpass her father's greatest failure: the exploration of Antarctica.

Hot on her frozen trail are a trio of genius inventors, hired by an influential publishing tycoon to retrieve the plundered valuables of an African queen.

It's a deadly race to the bottom of the world -- an uncharted land of wonder and horror where time is broken and the mountains bring madness..

The Review: This 56-page hardcover graphic novel, set in the richly-textured world of the League of Extraordinary Gentlemen, offers a delicious side story of Nemo's daughter, Janni, as she seeks to emulate her father's last doomed mission and explore the dangers of the deepest Antarctic - a land steeped in dangerous myth and magic.

Homaging HP Lovecraft, Jules Verne and Edgar Allan Poe (to name but few), Moore and O'Neill weave a disturbing and unsettling tale of fate-filled exploration, crammed with startling and horrific yet hypnotic imagery - and I'm not just talking about a human-sized penguin in a fur coat.

Ever pushing boundaries, the tale is crammed with literary and visual detail from start to finish, opening with the finale of a daring raid to steal the valuables of a sadistic, deposed Queen in New York and not drawing breath until the final page.

Included in the adventure is is a head-scratching three-page sequence where time runs together and Janna's expedition run afoul of Cthullu creations; and more references to the inspiring work of several masters of science fiction and horror than you can shake a stick at.

Overall, it's a dark, gloomy and unsettling story, peppered with horror and the deaths of some of Janna's most loyal Nautilus crew members - but, without giving too much away,  the tale does close on a happier note for some of the cast. O'Neill's art is as ever, glorious and unique, successfully startling more than once with a range of stunning panels as Nemo's daughter descends ever deeper into the world first conjured by Lovecraft's At the Mountains of Madness story..

Moore and O'Neill are by no means the first to tread into Cthullu mythos, but between them they conjure imagery and story that successfully emulates the original. As ever with such work, it should hopefully prompt some readers to seek that out (perhaps even picking up a copy of INJ Culbard's stunning graphic novel adaptation, published by SelfMadeHero).

This project is, possibly, just a taster of more Lovecraft-inspired work to come from Alan. Last year, during the first N.I.C.E. convention, he announced his new 10-part comics project, Providence, a sequel to his four issue mini series Neonomicon, which will be published by Avatar Press. Set in 1919, featuring Lovecraft himself as a character, it will explore the inspiration behind the horrific mythology he created.
Posted by John Freeman at 9:56 am