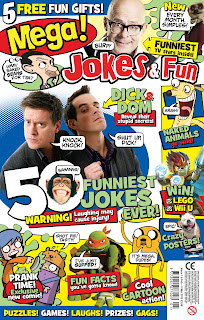 Immediate Media Co is to launch Mega magazine next Wednesday (6th February 2013), a new humorous and fun title aimed at 7 to 11 year-old boys which, from the look of it, emulates the format of titles such as Egmont's TOXIC and Titan Magazine's Totally... format.

The four-weekly title - priced at £2.99 - will focus on a different popular theme or brand each month, enabling it to tie in with current trends that appeal to this young audience.

As with all titles in this sector Mega will feature a cover mounted gift - these aiming to reinforce the brand's fun value. The launch issue comes with a free joke kit containing a whoopee cushion, slimy snot splat, a bendy pencil and a toilet with 'fart putty'.

The title is being produced by Immediate Media Co's award-winning youth and children's editorial team, with art from Jamie Smart and others.

"We've had great fun producing this exciting new title," says Martin Stahel, publisher of Immediate Media Co's Pre-teen titles. "Each issue will give children the opportunity to explore a new or popular theme or brand, to keep the title fresh and current. We're looking forward to working with new licensees and fantastic brands to develop great content for this young audience."

Kevin Pettman, editor of Mega magazine, adds: "Mega contains everything young boys love and like to talk about in the playground. Capturing their enthusiasm for the latest trends and TV characters, the title will be full of our readers' heroes and the jokes and facts they can share with their friends."

"We’re going for a mix of licensed and unlicensed material, anything we think boys of that age would like," deputy editor Ned Hartley tells us. "It will be quite fluid, but Jamie Smart’s fab comic (and characters he created) will be a very important part of Mega."

• Mega magazine will be priced at £2.99 and will be available at all major retailers and independents around the UK from Wednesday 6th February.
Posted by John Freeman at 7:24 am