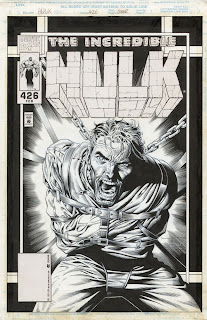 British creators are supporting an auction to help American comics writer and novelist Peter David get back on his feet after he suffered a stroke late last year.

The auction, which will take place later this month, has been organised by US comics artist JK Woodward and will offer art featuring all of Peter David's characters; those that he created or those that belong to Marvel and DC that he brought to life in that special Peter David way.

"Originally, I wanted to do one big jam piece of all the characters drawn by different artists so I called on some friends to see if they'd be interested," he explains in a blog post. "Then it occurred to me that one big jam piece (as great as it would be) would not bring in as much money as separate pieces and would be a logistical nightmare as well as costing a fortune in postage stamps.

"So I decided separate pieces of art from each artist, but I would still have every artist contribute a unique character, otherwise we'd have 20 Maddrox's (though that might be somewhat appropriate when you think about it).

"I approached IDW edtor, Chris Ryall and Marvel X-book editor, Nick Lowe to see if I could make use of their rolodex. They were kind enough to send out emails and as a result I received responses from most of the contributing artists."

Among the contributions is the Incredible Hulk cover, above, drawn by Madefire's Liam Sharp and inked by Robin Riggs. "It's the second cover from our run with Peter on the Hulk in the mid nineties," says Robin, "and has always been one of my favourite pieces. I hope it makes a decent amount for Peter."

Other ways to support raising funds for Peter, suggested by his wife, Kathleen, include:

• Buying his e-books from Crazy 8 Press (via ComicMix) or from Amazon or Barnes and Noble websites. These are books that he gets the money from directly and the most per book. The quickest and most money is buying the EPub versions from ComicMix, by the way. "The more we sell of these books, the easier it will be for us to pay the [medical] bills as they start to pour in," says Kathleen.

• Buying his other books does help – especially the Marvel graphic novels he has written. The Crazy 8 books are the most immediate help but all his writings do help the family and the family’s ability to pay bills. If you buy via Amazon, please use this link

, and if you buy via Barnes & Noble, please use this link, which will bring in even more funds.

• Buy X-Factor. Put it on your pull list at your local comic book store. Encourage others to do the same. Peter is still writing it and will continue to write it. Issue 250 [which shipped in mid January to comic shops] is a great jumping on point for both X-Factor and something Peter has been working on in the Marvel Universe since his Hulk days."

•  There's also a donate button at this blog post

• The actual auction is in mid-February and will be announced on JK Woodward's blog and elsewhere soon.
Posted by John Freeman at 8:00 pm