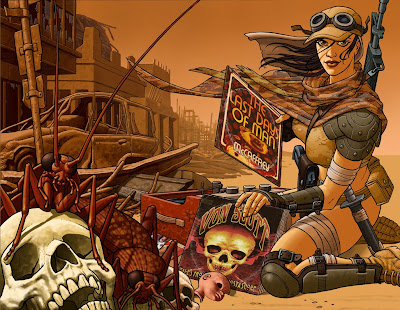 Released in time for last year's Thought Bubble, Paul Scott of Omnivistascope fame put together a US comic-sized collection of the strips he's done with artist Paul McCaffrey, under the title The Last Days Of Man.

Since the release, Paul tells us the collection has garnered plenty of praise - no surprize give Paul's past awards for projects such as the humour title Solar Wind and his other works such as Midlam Miniatures.

Reconstructed through genetic and data records, just over three million years in the future, the two Pauls have worked on recreating some of Professor Brabblepap’s most important work for the University of Flobobobapple on that most enigmatic and pervasive extinct species, the human race.

Join us them a journey through the great hives of Earth, where the curious descendants of the human race still live. Visit the distant asteroid base of Professor Milius, where the last great human experiment is about to reach its conclusion. Tune in to the exclusive Thoughcast™ from Kesney Towers as the inventor of Bodyclock™ runs out of time. And in deep space, the transmitted shadow of a long dead race threatens the entire galaxy.

Included in the comic is all of their work from across five issues of the critically acclaimed science fiction comic, Omnivistascope, with four stories, re-mastered and presented in a new 36 page US format comic book.

• The Last Days of Man is on sale online for just £3 at: www.midlamminiatures.co.uk/books/LDoM.html