Pondering the French delight of the "Ninth Art" 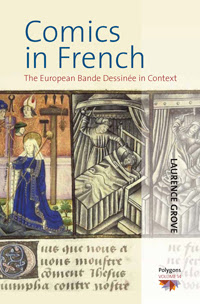 Publishers Berghahn Books have released a paperback edition of Comics in French by Laurence Grove, which offers an in depth study to the development of bande dessinée.

Whereas in English-speaking countries comics are often considered, beyond the comics community, for children or adults ‘who should know better’, in France and Belgium the form is recognized as the ‘Ninth Art’ and follows in the path of poetry, architecture, painting and cinema. The bande dessinée [comic strip] has its own national institutions, regularly obtains front-page coverage and has received the accolades of statesmen from De Gaulle onwards.

Released last year in hardback, the book gained good reviews. "Comics in French is written in a friendly, engaging style," noted the Journal of Graphic Novels & Comics. "Grove patiently explains and justifies his largely chronological, historical approach at each step of the way, discussing its pros and cons. The book covers a vast number of text/image… [and] is a valuable and very readable new contribution to bande dessiné studies. It deserves a place on the bookshelves of teachers, students and aficionados alike.”

Laurence Grove is Reader in French and Director of the Stirling Maxwell Centre for the Study of Text/Image Cultures at the University of Glasgow. His research focuses on historical aspects of text/image forms, and in particular bande dessinée. He is President of the International Bande Dessinée Society and, as well as serving on the consultative committees of a number of journals, he is general editor of Glasgow Emblem Studies, and co-editor of European Comic Art. Laurence has also authored (in full, jointly or as editor) nine books and approximately forty chapters or articles.