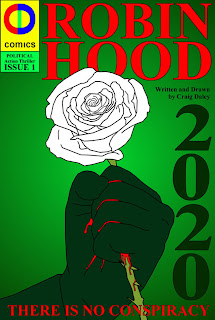 How would Robin Hood and his band of Merry Men respond to the current political and economic climate in the UK? How will they react when placed just seven years into future and the dystopian nightmare of 2020?

‘It just felt like the right time to write a story like this,” said the writer and artist Craig Daley.

The first digital issue - available online or on CD ROM from the Sheffield Space Centre - issue includes the usual humour expected from CDComics, whose previous titles include three Surreal Murder Mysteries (Meadowhell, Spring Heeled Jack and Football Crazy) and a 1960s-based alien abduction story, Carnacki & Hannay. This time, Craig's telling his story against the backdrop of a society that is divided across old class boundaries. On one side the plebs and on the other those who were born into privilege, the ruling elite class.

Along with a revamped Robin Hood, the comic has many of the characters you would expect to see such as Little John, Marion, Tuck, Much – and Scarlet, who has been through the most blatant transformation and is now a female. Along with the characters, even Sherwood Forest gets a surprising make over as the action moves from the traditional forest locations to the cities of London and Sheffield in 2020.

There isn’t a bow and arrow in sight, but the politics is close enough to the truth that the comic keeps the appearance of reality that flows through CDComics’ output. The comic says ‘There is No Conspiracy’ and unlike political thrillers, such as The X-Files, it doesn’t create one. The narrative uses current and historical events, facts and figures and just takes the reader seven years into the future.

“I'd like to think it owed more to A Very British Coup with action piled on top, rather than The X-Files," says Craig. "That was the reasoning behind the title of this first issue."

The action is full on and takes centre stage throughout this 32-page first issue that introduces all the main characters and the comic also asks enough questions to make you want to read Issue Two.

• Issue One of ‘Robin Hood: There is No Conspiracy’, is available to download from Amazon.co.uk, Drive Thru Comics, Smashwords (and after processing by Smashwords will be distributed on Kobo, Diesel, Barnes & Noble, Sony and Apple, priced around £1.25/$1.99 or the Euro equivalent.

• The CD ROM version of the comic packaged in a slim line DVD case with wrap around cover will also be on sale, priced £2.50, from Sheffield Space Centre on the Wicker, Broomhill’s Galaxy 4 and Record Collector, Rare and Racy on Devonshire Green and Blackwells on Carver Street, Sheffield
Posted by John Freeman at 6:00 pm