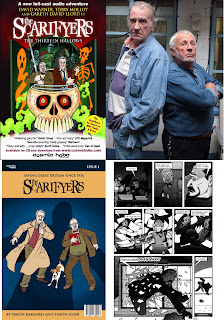 I'm ready for my close-up: The Scarifyers

As we enter Doctor Who's 50th anniversary year, I'm ready for my close-up investigates a radio drama series tangentally connected to the franchise. The Scarifyers is a horror / black comedy series, with new installments broadcast each year on BBC Radio 4 Extra (formerly BBC 7) and released on CD and concern the adventures of an elderly horror writer and his retired police sidekick as they investigate supernatural crimes and occurances in 1950s Britain. The cast includes Terry Molloy (Doctor Who's Davros), Nicholas Courtney (Doctor Who's Brigadier Lethbridge-Stewart) and David Warner (Time Bandits et al.) with supporting cast including actors famous for roles in Doctor Who and other Sci-Fi dramas such as Gabriel Woolf, Philip Madoc, Gareth David-Lloyd and Brian Blessed.

Alex Fitch talks to series writer and producer Simon Barnard and CD cover artist Garen Ewing about the genre crossing narrative, their love of old SF and horror and the use of iconic actors in new serialised roles. 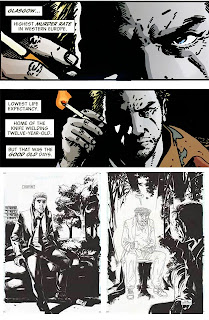 Panel Borders: Around the country with Constantine

In the third of our trilogy of shows looking at the 25th anniversary of John Constantine: Hellblazer, Alex Fitch talks to creators of the comic book from opposite ends of the UK. Scots novelist and playwright Denise Mina discusses her year long tenure as writer of the title from 2006-07 and remembers the challenges of penning her first comic book scripts; Brighton based artist Warren Pleece talks about pencilling and inking 9 issues of the comic in 1997 and '98, plus collaborating with Philip Bond for SF spin-off Bad Blood at the turn of the century.