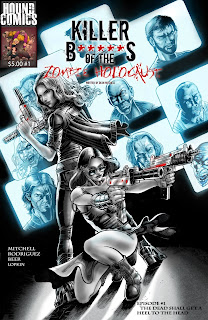 US publisher Hound Comics has just released the first issue of Killer b*****s of the Zombie Holocaust, featuring a script from British writer and film producer Dean Mitchell and art from Renzo Rodriquez and British artist Mark Beer.

Killer B*****s of the Zombie Holocaust - described as a completely new twist and vision on the popular zombie genre - is a road trip following Laura and Sarah as they battle through a game controlled by a group of people inside 'The Dome'.

Inspired by the likes of Planet Terror, Battle Royal, Lost and even the game Mass Effect, Killer B*****s of the Zombie Holocaust is a story about two incredible girls and their fight for survival in a game unlike anything else and a truth that is as unique as the title of the series.

In episode one, we get to meet the protagonists Laura Woodford and Sarah Coombes - two girls amongst 100 people, chosen to fight in a game created by ‘The Dome’.

"This new series is all about secrets and who’s who," says Dean. "The first episode shows us how strong the girls become at the end of the game and also how the game begins, using flash-backs and flash-forwards. All the unanswered questions that come with this, will be revealed as the story progresses."

This series will interact with the reader like no comic has before, the creators claim. The girls have a Twitter account, where photos taken during their battle will be uploaded. Plus there will also be opportunities for readers to actually star in the comic - and in this issue a character called ‘John Parrish’ is in fact a fan on Facebook who won a competition and is now a fully-fledged member of ‘The Dome’.

Dean grew up reading 2000AD and Tank Girl, but has largely worked in film and TV production, with credits that include an award winning short and a feature film that has now landed him a producer role with Burn Hand Film on their latest film, being shot April 2013.

"It was during college though, that the real magic happened," says Dean of the origins of Killer b*****s of the Zombie Holocaust. "I wrote a small script for a friend called John Day, so he could test his skills on Adobe after effects. I talked my girlfriend and her friend into taking part, and we went to a forest and filmed them - this sounds dodgy as I write it, but stay with me! - and when we left the forest we had some amazing footage of two girls and some serious zombie deaths. So we put the film together (well kinda, was all made in 24 hours flat) and alive came the Killer B*****s!

"With that, I then got carried away and wrote this giant script, I sat back started to read it and all I could see in my mind was comic panels. I was at the time working on a graphic novel called Eri but I knew everything had to stop for the Killers! So I searched for some new artists and came back with a guy from Mexico, a guy from Wales and a girl from New York and 1 year later? Here we go!"

"It's been a long time coming," Mark Beer adds. There have been many changes over the last few months - and all for the better!

"Partnering with Hound Comics has been a win win situation for us," he says. "The company has allowed us the time to bring you the best we can for the coming year. We are in good company, passionate people who are proactive in wanting to bring their A-game."

Ever since reading his first Superman comic, Mark was destined to follow his passion for comics. Graduating from University after studying illustration he started his freelance career that took his work into many different directions and interests. Working in 3D sculpt for conceptual work, traditional paint, digital paint and comic pencils Mark has kept busy pursuing his dream of working in the comic industry.

His work has been featured in several publications including Imagine FX, SciFi Art Now (compiled by downthetubes John Freeman), on ign.com and the Zombook. As a freelancer Mark has worked on upcoming film projects including The legend of Oakswamp and the mysteries of Ironwood, Facility 31 and The Unseen from Director Tim Bui.

Creating art for various projects between commissions he has created album artwork for heavy metal group Obzidian's "Damned eternal" and has worked with a natural history publication company on Dinosaur posters, where he worked closely with paleontologists at Oxford and Cardiff museums in the UK.

In addition to his work as the shader and colourist for Killer B*****s , he's keeping busy with other pencil and cover work and is also busy creating tie-in statues and busts for the title's release.

• You can purchase a physical copy here on amazon.com here

• Digital copies are available in many places too, including Amusedom

• More about the title on the Hound Comics web site

• View a preview on the Hound Comics web site