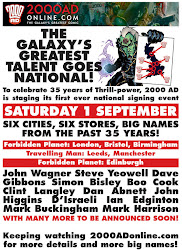 It’s been the cutting edge powerhouse of British comics since 1977 – and now 2000AD is celebrating 35 years of Thrill-power with its first ever National Signing Event.

Just days before DREDD 3D hits movie screens, on Saturday 1st September, six comic book stores in six cities from north to south will play host to a band, nay, a legion of top British comic book talent from the past three and a half decades.

From old hands such as Dave Gibbons Simon Bisley to the newest finds such as Al Ewing and Alec Worley, 2000AD will be celebrating Britain’s greatest export across the nation.

- More big British names will be announced in the coming weeks – keep an eye on 2000adonline.com for all the latest updates