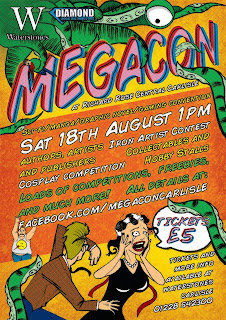 Despite the number of comics shops in places like Lancaster, Middlesbrough, Newcastle-Upon-Tyne and Carlisle, the north of England seems to have few comics events. This is starting to be addressed at a local level with Newcastle's one day library-based Canny Comic Con in December 2011 and now Carlisle's half day MegaCon next weekend, showing that local comics fans do not need American guests or enormous London venues to enjoy themselves.

Levi McGlinchey, Owen Michael Johnson and Graham Barke are members of staff at the Waterstones bookshop in Carlisle city centre and are organising the Carlisle MegaCon event due to take place in the Richard Rose Central Academy on Saturday 18 August 2012. Guests scheduled to be there include artists Sean Phillips and Graeme Neil Reid, writers Jim Alexander, Andy Diggle and Gordon Rennie, and local crime and horror novelist Matt Hilton. Jeremy Briggs spoke to the organising team about the event.

DTT: As booksellers in the Carlisle branch of Waterstones, what books do you stock in your graphic novel and manga sections and which of them are good sellers in your store?
MegaCon Team: At Waterstones Carlisle we sell a wide range of main stream superhero titles, independent graphic novels and manga as well as the usual staples of science fiction, fantasy and related product. We have a huge market for manga in Carlisle, as such our store has one of the largest manga sections in the company! Umbrella Academy is one of our bestselling titles that appeals to a wide market, both our manga and teen customers. Characters such as Batman always sell well, Arkam Asylum, Year One and Long Halloween being the biggest. Comic book movies of recent years have brought both an influx of new readers and massive interest in those characters. In short, the nerd army of Carlisle has been very kind to us, that is one of the reasons we mounted Megacon!

DTT: Knowing what the local comics fans purchase from the store, how did that influence your choices of guests, dealers and the talks or workshops due to take place during MegaCon?
MegaCon: The tastes of our regular customers vary, but the unifying theme is genre books with a dark edge to them such as Vertigo. Those customers also prefer material not concerning superheroes. Our independent titles do well, which is why we are interested in hosting graphic novelists who practice both mainstream books and creator owned work. We have a huge growing trading card market in Carlisle. We are one of the top two stores in the company championing trading card games. To cater to this need in Carlisle we have decided to start holding trading card tournaments, and have such invited Konami along to MegaCon and providing areas for both Yu Gi Oh and Magic the Gathering players.

DTT: Having run smaller events in-store in previous years, why did you decide to expand this year and how did you end up using a local school?
MegaCon: MegaCon was previously ReCon in our store. We have held ReCon for a number of years in conjunction with Diamond Publishing (previously Tokyo Pop). Our ReCon audience has grown far beyond our shop capacity, so this year we decided to take the leap and take ReCon to the next level. Our branch of Waterstones has used Richard Rose as a venue for author events in the past. We loved the atmosphere and vibe of the place so much we though it would be the perfect place for a Con. The main atrium of Richard Rose is such an interesting and unique space and lends itself perfectly to such a fun large scale event. 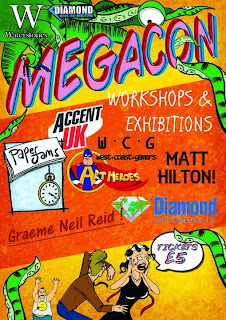 DTT: You have a diverse selection of guests from comic artists and writers as well as local novelist. Was it a deliberate plan to get as wide a selection of creators as possible?
MegaCon: MegaCon is also a community project. We chose specifically local creators as a means of showcasing incredible talent form the North West. We hope that this inspires other artists, writers, and creators/nerds to be more active. This is the first event of its size and type in Cumbria's history, so we have tried to make the event as accessible and interesting to the widest audience possible. The diverse programme of competitions, tournaments and workshops should satisfy not just die-hard comic fans, but also gamers, cosplayers, collectors and casual fans of popular culture in general. We each grew up loving cult entertainment but felt isolated in such a rural area. There was never an event unifying the tribes. We intend to get young people appreciating, and more importantly, making great art, be that comic or otherwise.

DTT: Your selection of exhibitors/dealers seems to be a mixture of local businesses and local small pressers. Did you set out to have a good variety of stallholders or was it just the way it turned out?
MegaCon: There are a lot of niche businesses in the area. We didn't have to go very far to fill all the spaces available, but once word got out we were holding a Con, the response was overwhelming and we had an army of local businesses and artists at our door wanting a space. Sadly we didn't have space for everyone that wanted a stall, but next year we hope to make MegaCon even bigger to accommodate more local dealers.

DTT: How will you gauge the success of the event and, if it is successful this year, could you see the Carlisle MegaCon becoming a regular event?
MegaCon: It's our full intention to carry on in the tradition of ReCon and hold MegaCon annually. There is loads of budding comic book creators in the area, just itching to get started. If MegaCon is incentive for just one to pick up a brush or pen and make great art, we as organisers will be thrilled. Equally, if our attendees - be they 30 or 300 in number, 4 or 94 in age - have had a great day, we will have succeeded in our goals. The long term vision for MegaCon is to build upon it year on year. We have had big industry names confirm they would be interested in being on the bill for next year, so we very much hope attendance justifies further expansion in the coming years.

DTT: Thank-you all for taking the time to talk to us.

Carlisle MegaCon will take place on Saturday 18 August 2012 at the Richard Rose Central Academy on Victoria Place, Carlisle. Doors open at 1pm and the event will run until 6pm. Tickets cost £5 and are available in advance at the Carlisle branch of Waterstones in person on via the phone (01228 542300), as well as on the door on the day (subject to availability).

The MegaCon organising team were out and about cosplaying in Carlisle city centre in July to publicise the event and were photographed by the Carlisle News and Star.
Posted by Jeremy Briggs at 7:00 am