Commandos by Air, Land and Sea! 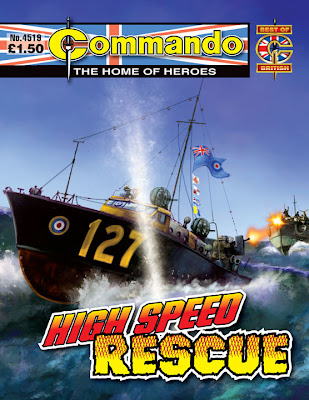 Every field of combat is covered in the latest batch of Commandos, on sale now in good newsagents (don't bother with the bad ones). Here's the rundown...

Growing up in Malaya, young Sam Logan dreamed of being a pilot. He volunteered for the RAF as soon as war broke out -- only to be washed out of flying training thanks to the dizziness that overcame him every time he took to the air.

He ended up on an RAF Air-Sea Rescue Launch, patrolling the choppy grey waters of the Channel. Almost as much as he did himself, Sam’s crewmates wondered if the reluctant sailor was up to this dangerous work. Their very survival depended on him working as part of a team... especially when there were E-boats on the prowl. 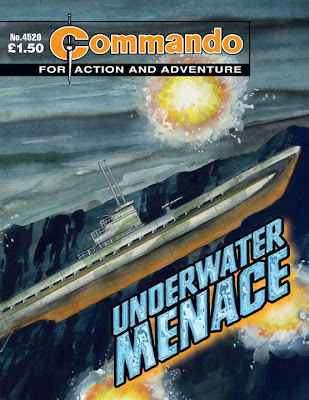 Ken Kluger, son of a Japanese mother and a German father, had attended university in England and was fluent in all three languages. When war broke out, though, he ended up working for the British as a translator and code-breaker.

Soon, however, he found himself involved in much more dangerous work. He became part of a perilous plan was to use a captured German submarine -- holding a lethal secret weapon -- to destroy an enemy U-boat pen and stop a deadly attack! 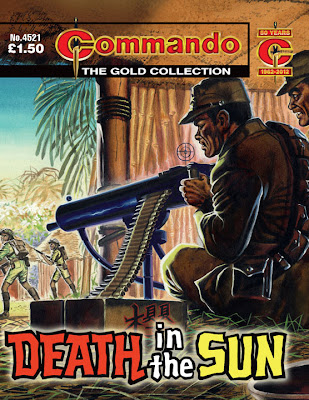 Just another routine patrol, just another empty village in the Burmese jungle. Nothing to fear, every hut silent, deserted, no movement in the shadows, no sound on the still, sultry air. Everything calm and peaceful.

Why then did fingers tighten nervously on triggers, why did the cold sweat of fear break out on every man’s brow? It was as if some sixth sense was telling them of terrible danger, of a fiendish trap waiting to be sprung.

It only needed one man to see the sudden glint of death in a darkened doorway, to scream a warning... a warning that came too late!

"I hope nobody minds that we’ve slipped back into 1961 for this story,” says Calum Laird, Commando Editor, “making it 51 years old instead of just 50. Once you’ve read it you’ll see why we didn’t want to let this one get away. A fortune-teller’s prophecy, good friends at each other’s throats and the constant menace of death without warning. Oh, and a twist in the tail. This is classic Commando fare.

“Once you’ve opened Ken Barr’s menacing cover, Garcia’s art is full of action -- check out page 11 for just one -- pushing the story forward at a breathless pace.

“So, will our hero live or die? Find out inside.” 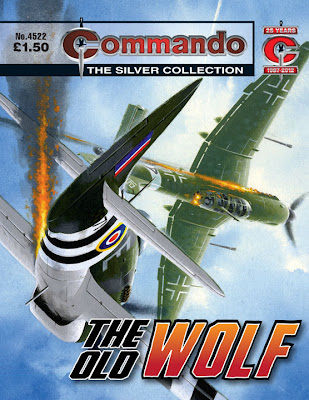 By nineteen-forty-four Allied pilots saw the Junkers 87 as an easy kill. Too slow and sluggish, they said, to pose a threat.

But Colonel Otto von Arne had plans for his aircraft. By adding rockets to assist take-off and extra machine guns for defence, he made sure that once again his squadron was a force to be reckoned with -- especially when they were also armed with powerful 37mm guns.

“Commando is often dismissed -- usually by people who haven’t read it for decades -- as being full of cardboard cut-out characters who only bark clichés like ‘For you the war is over!’” notes Commando Deputy Editor Scott Montgomery. “German characters, in particular, are too easily stereotyped like this so let’s meet Colonel Otto von Arne -- AKA ‘The Old Wolf’.

“Although is Otto clearly the antagonist, he’s no goose-stepping Nazi. In fact, he’s intelligent, brave, chivalrous and also respected by his British counterparts -- a fully-rounded character. And that’s really what Commando is all about.”

• Steadfast! the Commando artwork exhibition at The Gordon Highlanders Museum in Aberdeen runs until 30th November 2012. There are more details about the exhibition on the museum website.
Posted by John Freeman at 6:00 pm