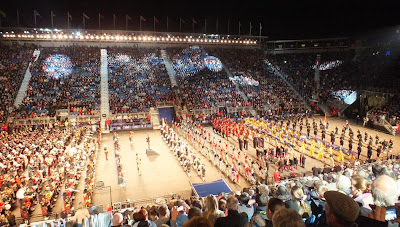 The Royal Edinburgh Military Tattoo has been running in Scotland's capital annually since 1950 and was upgraded to Royal status in 2010. As part of the greater Edinburgh Festival, the Tattoo takes place in the open air high above Edinburgh on the Castle Esplanade seven times a week between 3 and 25 August 2012 with upwards of 1000 performers displaying to an audience of around 10,000 people for each performance. 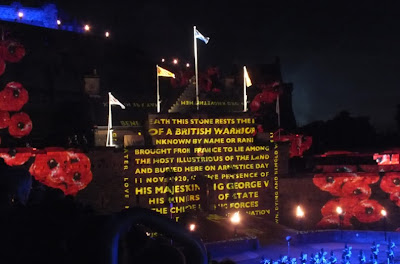 Since 2005 the Tattoo has included a 'son et lumiere' backdrop using the walls and ramparts of Edinburgh Castle itself to project massive images on. These have often covered military subjects and this year included a tribute to the fallen with images of poppies and the inscription from the Tomb of the Unknown Warrior in London's Westminster Abbey. 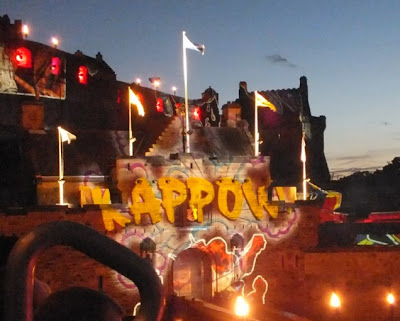 So the displaying of a "KAPPOW" comic sound effect was something of a change of pace for the Tattoo as images of generic American-style superheroes were projected onto the Castle. 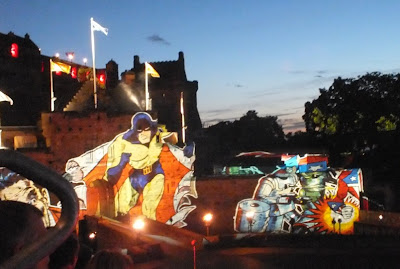 Amongst the massed military bands and selected civilian bands and dancers at this year's Tattoo, the band of the United States Naval Forces Europe performed a selection of musical themes from superhero television series and films described by the Tattoo as "highlighting the external battle between good and evil". 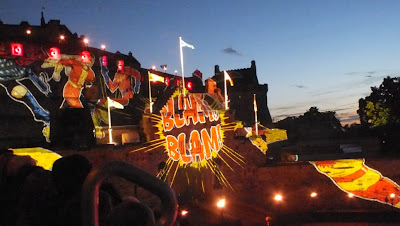 These were not all spandex clad superheroes as the audience appreciated a US Navy band appropriately playing the theme to the Popeye The Sailor cartoons while local British characters of Dennis The Menace, Minnie The Minx, Bananaman, the Broons and Oor Wullie were projected on the Castle with the full permission of DC Thomson as two performers dressed as Dennis and Minnie menaced the band on BMX bicycles. 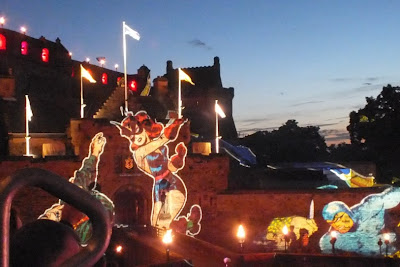 The band, as with many of the other bands on display, marched and moved into different formations during their performance. 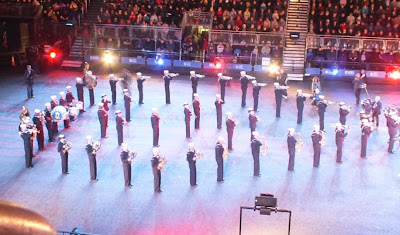 As the music changed to both the Main Theme and Can You Read My Mind? from 1978's Superman The Movie, the band moved into Superman's 'S' emblem as the image on the Castle walls changed to a Superman-style character sporting the Royal Standard Of Scotland's Lion Rampant on his chest. 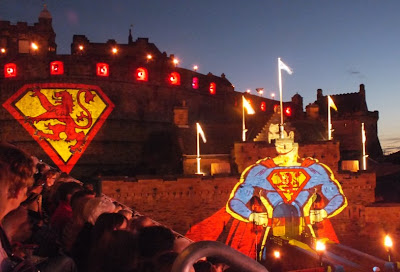 The Royal Edinburgh Military Tattoo takes place between 3 and 25 August 2012 and there are more details of the event and the opportunity to purchase the remaining tickets at the Tattoo website.

The BBC will be broadcasting a recorded version of the event later in August 2012.
Posted by Jeremy Briggs at 7:00 am