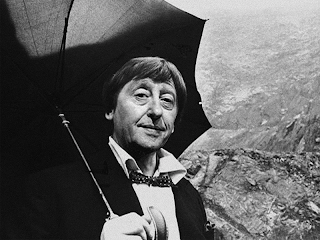 When artist Bryan Talbot, creator of The Adventures of Luther Arkwright and Grandville was recently honoured Northumbria University with an Honorary Degree, friend and fellow creator Al Davison couldn't resist a bit of fun at the expense of a new Doctor by photoshopping him into the guise of an almost as well known Time Lord.

Al cleverly metamorphosed the newly-created Doctor into several incarnations of Doctor Who, including this PR image from The Krotons, recently released on DVD.

Bryan was awarded the Honorary Degree of Doctor of Letters alongside students from the School of Arts and Social Sciences, and you can see him in suitable finery below.

Bryan, who lives in Christchurch in Sunderland, has worked on a range of ground-breaking comics and graphic novel and is credited with being the writer of Britain’s first graphic novel - The Adventures of Luther Arkwright – serialised from 1978. 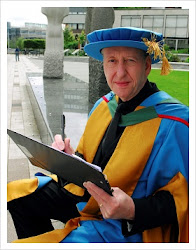 In 1989 Arkwright won the Mekon award for Best British Work and four Eagle Awards. Published in nine countries it has a strong cult following which has recently been made into a three-hour audio drama featuring David Tennant as Arkwright.

Probably his most famous work, the graphic novel Alice in Sunderland explores the links between Lewis Carroll and Sunderland. It was nominated for a host of awards and is in its fourth printing in the UK.

His graphic novel The Tale of One Bad Rat, which deals with the after-effects of child sexual abuse, also won a host of awards including the Eisner, the Oscar of the comic industry. It is published in 16 countries and used in several child abuse centres in Britain, America, Germany and Finland.

Bryan has created a variety of comic strips for publications as diverse as Radio Times, Wired and Imagine. His most recent work, Dotter of Her Father’s Eyes, is a graphic memoir written collaboratively with his wife, Mary.

“I sincerely thank Northumbria University for this Honorary Degree," says Bryan. "It is a great honour, not just for me, but also for the medium I work in. It is indicative of how sequential art in the form of the graphic novel is increasingly accepted as a legitimate art form.”

We think it's a bit of an honour being turned into a Time Lord, too.