Get set for Dredd - the movie 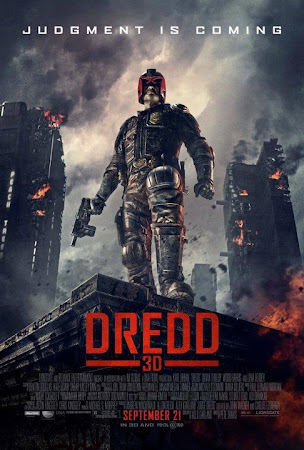 Here's the a new promotional poster for the new Judge Dredd movie starring Karl Urban, due in UK cinemas on Friday 17th September.

The future. America is an irradiated wasteland. On its East Coast, running from Boston to Washington DC lies Mega City One a vast, violent metropolis of over 400 million citizens living in perpetual fear. The only ones attempting to impose order in the urban chaos are The Judges. Law enforcers, juries, judges and executioners rolled into one.

The epitome of these Judges is Dredd, given a mission by the Chief Judge, to road test a rookie Judge, the powerful psychic Cassandra Anderson. It is to be a training day.

The Judges head for a seemingly routine homicide in the notorious Peach Trees mega-block - a 200 storey vertical slum run by the pitiless Ma-Ma clan. But when the Judges attempt to arrest one of Ma-Ma’s chief henchmen, Ma-Ma shuts down the entire building and orders her clan to hunt the judges down.

Our two judges are now caught in a vicious and relentless fight for survival...