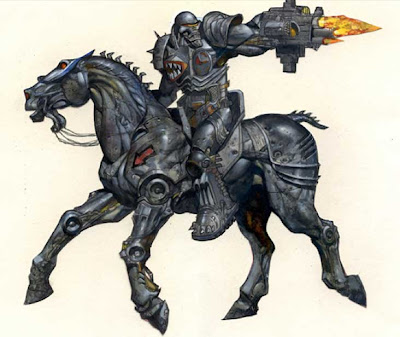 Heavy Metal Magazine has launched a second art competition tying in with its Four Horsemen of the Apocalypse project. This time titled “What is your Vision of War?” - and this competition is open to anyone in the world - and artwork by Simon Bisley is just part of the top prize.

The fantastic apocalyptic submissions from the first Four Horsemen contest (“What is your vision of Pestilence”) drew fans from all over the US. “What is your vision of War?” is open to fans all over the world, with a grand prize that includes an original Simon Bisley painting of War and a prominent placement of winning artwork in Heavy Metal Magazine; plus runners up prizes that include winning artwork in Heavy Metal Magazine, a signed edition of The Four Horsemen of the Apocalypse Book 2: The Chosen, out later this month and free one-year digital subscriptions to Heavy Metal Magazine.

Founded in 1977, Heavy Metal (www.HeavyMetal.com) has become an iconic American science fiction and fantasy comics magazine known world-wide for its incredible blend of dark fantasy/science fiction and erotica. Kevin Eastman, co-creator of the Teenage Mutant Ninja Turtles, purchased the world renowned title in 1990 and serves as Publisher and Editor-in-Chief.

In Four Horsemen, Adam Cahill is a warrior bound by bloodline to guard the Seven Holy Seals that contain the End of Days. But sinister forces strike against him and send him into Hell itself. There, he must find three corrupt souls, chosen by Divinity, to join him in battle against the Four Horsemen to not only save their own souls, but to decide the very fate of Humanity. This title was created and co written by video game mastermind Michael Mendheim.

In addition to the works of Simon Bisley, the series will feature additional art by the late Stan Winston, Tim Bradstreet, Chad Fidler, and Dave DeVries, and script written by co-writers Mike Kennedy and Sean Jaffe.

• All entries MUST be posted by the end of day 13th August 2012. Fans can submit their entries by posting their artwork at https://www.facebook.com/Thefourhorsemenoftheapocalypse/app_182300495191195

• Visit the contest webpage at http://www.fourhorsemen.heavymetal.com/WarArtContest-id-73.html

• The Four Horsemen of the Apocalypse: Book One: Helldiver is available here on Amazon.com

• Full Terms and conditions of the contest can be found at http://fourhorsemen.heavymetal.com/contest_agreement.html