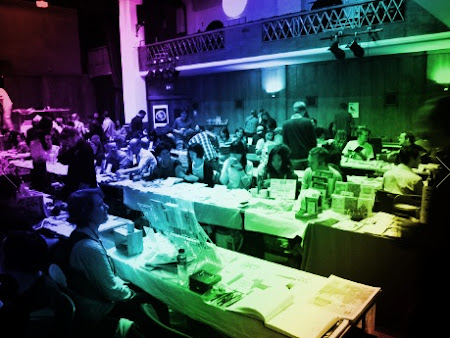 A quick reminder that the 2nd International Alternative Press Festival begins on 20th July, featuring an inspired assortment of creative events in London. The festival events lead up to the 4th-5th August weekend Small Press Fair in Holborn’s Conway Hall.

Alternative Press is a group of artists concerned with promoting creativity through the mediums of comix, zines, book arts, screen printing, poetry and other forms of self publishing. Organising events since 2008, last year, produced the first International Alternative Press Festival, which attracted over 1,000 visitors. Alternative Press is building upon the success of last year’s festival to establish an annual programme.

From the 22nd July - 5th August, a parade of 11 venues on Lambs Conduit St and Great Ormond Street will host artwork by a broad and exciting selection of international comic artists.

GOSH! Comics and Orbital Comics stores are hosting related exhibitions as part of the festival. This includes the work of Private Eye cartoonist Dave Ziggy Greene at Orbital Comics and the launch of the new issue of The Comix Reader, an alternative comics newspaper that attempts to reignite the free spirit of the underground press, at Gosh!