In Review: The Random Adventures of Brandon Generator

The plot: Brandon Generator, a freelance writer with writer's block, overdoes on 13 cups of espresso and blacks out. He awakens in a world similar to our own, but bits of reality disappear into a white void. Threatened by a giant four eyed monster made of coffee he tries to escape back to reality, deal with mysterious pieces of writing and voice mails that have arrived from the aether and track down a mysterious girl. 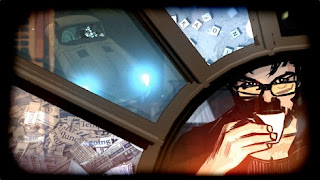 The Review: An excellent piece of comic book story-telling that sits in the middle ground between animation and motion comic; Brandon Generator tells a whimsical fantasy story that mixes Hoxton creative navel gazing with crowd sourced fantasy elements. The casting of Julian Barratt as the narrator is perfect – bringing to mind both the lo-fi fantasy of The Mighty Boosh and the satirised media world of Nathan Barley. As a disembodied voice, Barratt also sounds quite similar to regular Edgar Wright collaborator Simon Pegg (who, ironically, is currently starring in A Fantastic Fear of Everything, which is also a comedic, urban fantasy about an agoraphobic, paranoid writer).
I spoke to Wright at the launch event of the fourth and final episode of  Brandon Generator and told him that it also reminded me of Jackanory, a comparison he was quite pleased with, and he suggested Barratt's soothing, laconic tones are ideal to listen to just before bed! 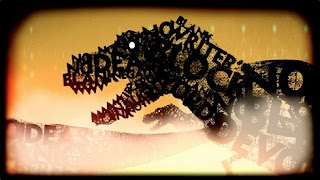 Commissioned by Microsoft to promote their latest internet browser IE9, the project also exists partially as a tech-demo, and while it also plays fine in other browsers, the website encourages users to upgrade to the latest Internet Explorer to use all of the interactive features. This may be less of a concern now for anyone who hasn't seen the story yet, as the interactive nature of the project has concluded – cliffhangers at the ends of the first three instalments encouraged the public to send in lines of dialogue, sketches of creatures and plot elements – and the way I experienced Brandon Generator at the launch event was projected onto a big screen, a closer experience to Wright's usual cinematic work, and one that didn't diminish the quality of Tommy Lee Edwards' art. David Holmes' ambient score is also very enjoyable, awaiting a full album release in due course.
The animation ranges from simple pans across Edwards' drawings to multi-layered moments where flashing messages sit on top of scrolling text on top of background images to reflect the lead character's disorientation, but rarely goes as far as fully animated characters. In any case, Edwards has experience in moving pictures, such as The Book of Eli, so he's better placed than many other comic creators in animating his own work. This means, while the project is more sophisticated than every motion comic that has preceded it, you can still imagine the possibility of it being printed as a regular graphic novel – something the creators refrained from promoting when asked about this at the launch, as it might detract from the novelty of it being an online experience. The possibility of an eventual graphic novel and the creators' love of print comics is evident in certain scenes where three or four panel borders are combined with the mise-en-scene. 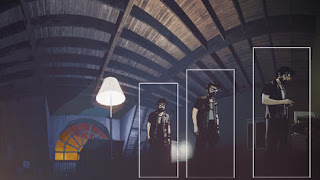 The crowd sourced elements incorporated into later episodes work well, from the design of the coffee monster and its name “Caffiendo” to the random lines of text the lead character is assaulted with as he tries to escape the monster, one of which was contributed by Erotic Comics author Tim Pilcher, who receives a credit at the end of episode 3. Hopefully this means other online projects by A list comic creators might also be willing to incorporate suggestions by their readers, without the usual fear of being sued by anyone on the unsolicited 'slush pile'.
Overall, Brandon Generator is worth checking out for fans of any of the creators' work and anyone curious about the possible future of online comics.

You can find the animated comic plus a plethora of behind the scenes information at http://www.brandongenerator.com
Posted by Alex at 4:55 pm