The Dark Newt Rises - in The Dandy! 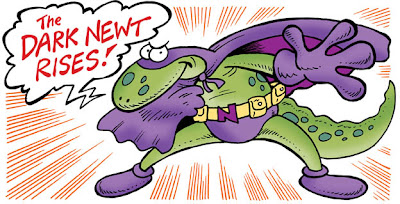 Watch out, folks - there's a new superhero in town... well in The Dandy, anyway, as Lew Stringer brings the Dark Newt to the weekly comic next week.

"This is the first time I've solely created a character for The Dandy," says Lew. How other popular strips, Kid Cops and Postman Prat were created by the editors and passed to the longtime comic creator to develop.

The name and premise is, of course, a spoof on the classic Batman saga The Dark Knight but Lew says the story goes off on its own direction. "Good job too, as there are a couple of other Batman spoofs in that issue by other artists," he reveals. "Anyone would think we were all influenced by some movie or something..."

"I'm very proud to have created a new strip for one of my lifelong favourite comics in The Dandy's 75 anniversary year," he says, "but I'm also a bit apprehensive about the reaction.

"I'm hoping readers like it. I certainly enjoyed writing and drawing it."

The Dark Newt will initially run in the comic for six weeks. Let's hope it goes down well.

• Check out Lew's blog for some pre-production art on the strip. The Dark Newt starts in The Dandy 3590 next Wednesday (18th July). More about The Dandy online at: www.dandy.com