Twenty-five years ago Commando published an issue entitled "Roll Of Honour" featuring a cover by artist Ian Kennedy. To celebrate the 65th anniversary of D-Day in 2009, Carlton Books released the then latest of their Commando reprint books entitled D-Day: Fight Or Die! with 12 issues reprinted inside it and a cover that was familiar but different - the field of battle had become a Normandy beach with landing craft added. When the book was reprinted in 2011, it lost the 'D-Day 65' logo as well as two stories bringing it into line with then current practise of publishing 10 story reprint books.

The issue that the cover was originally for, "Roll of Honour", has just been reprinted as part of Commando's Silver Collection. The writer was Commando regular Cyril Walker while the internal artwork was by regular Warlord artist Terry Patrick. Commando's Deputy Editor Scott Montgomery describes the issue in his introduction: "A neat little story this. At the heart of it is a murder mystery that spans the last few years of world War II and, as the title suggests, the honour of a regiment is at stake — but also much more… Writer Cyril Walker spins a good yarn as always, while Terry Patrick’s art is a little bit different for Commando, with almost cartoony faces and thick black lines. It’s well-suited to this character-driven plot. Finally, there’s Ian Kennedy’s cracking cover to finish things off."

Ian Kennedy will be appearing at the Gordon Highlanders Museum on Monday 8 July 2012 as part of the museum's free "Meet The Commando Team" event. There are more details of this and the Steadfast Commando artwork exhibition at the museum's website.

The batch of four Commandos available this fortnight are - 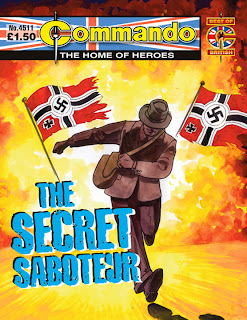 The Allies were gearing up to invade North-West Europe and the Germans knew it. Everyone was on high alert, with the Gestapo ruthlessly rooting out saboteurs and meting out rough justice to the civilian population. In one area, though, they were plagued not by sabotage but by a series of — for them — unhappy accidents wrecking their war machine. But were they accidents? One ex-Hamburg policeman — Tomas Merkel — wasn’t convinced, no matter what his Gestapo boss thought. 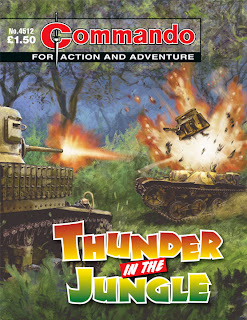 The Far East, 1944. It was widely believed that tanks could not cope with jungle warfare but the British were determined to prove this notion wrong — and were equally determined to regain Burma from the clutches of the Japanese. Second-Lieutenant Peter Wright had been an infantry officer but he and his unit had retrained as a tank crews. Now they were under pressure to deliver results…and their M3 Stuart light tanks would soon clash with the metallic might of their Japanese Type 95 counterparts. Could the green British tankies work as a team and survive the
THUNDER IN THE JUNGLE 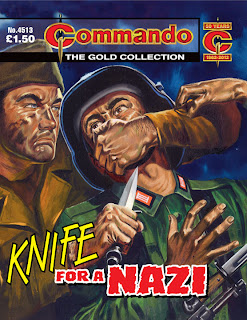 Up and over the cliffs they called unclimbable, swiftly and silently across country, deep behind enemy lines they came, the fearless men with blackened faces. These were the men they sent on a mission when all else had failed — These were the Commandos. On this raid it was not the enemy they feared, but the stranger in their ranks, the explosives expert who was the key man of the whole operation, and who by his inexperience and rashness became the danger man! Here is the story of how that man won the admiration and respect of the world’s finest fighting men.

In his introduction to this reprint editor Calum Laird says, "A new boy having to prove his worth to an established group, and in particular its leader, is a well-used theme in all fiction, although in just issue 16 it was new to Commando comics. Here author Elliot uses that set-up to bring an extra tension to an action-packed Commando special mission and in so doing makes it more than just a war story. Mind you, he had to do something a little bit special to live up to the promise of Ken Barr’s super-menacing cover. Can you feel how sharp that knife is? The black-and-whites from Salmeron have wonderful British-ness — the Commando CO’s ‘tache in particular. This Spanish artist served Commando for many years, and this example shows you why." 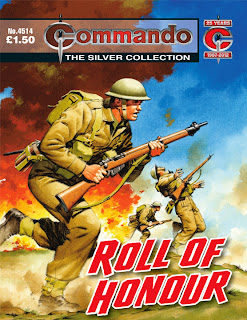 Jewel theft and murder — not the sort of things that would bring glory to a regiment’s roll of honour if any of its men were suspected of such crimes. That’s why someone was determined to keep a very big secret to himself. But there was someone equally determined to get at the truth, no matter what the cost!

• Steadfast! the Commando artwork exhibition at The Gordon Highlanders Museum in Aberdeen runs from 9 July to 30 November 2012. There are more details about the exhibition on the museum website.