Fanfare, Knockabout Comics and K9 team up for San Diego! 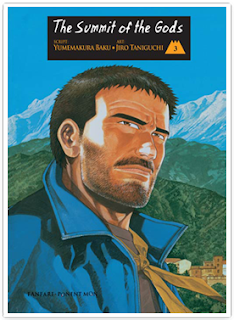 The annual pilgrimage that is San Diego Comic-Con has begun anew for many creators and British-Spanish publisher Ponent Mon/Fanfare has dropped us a line to tell us about  lots of interesting products they'll have at the show from a host of UK based producers, including some fun for the kids.

Basing operations from Booth 2102, their newest title on offer at the event will be Summit of the Gods volume 3, a story set around the disappearance of mountaineers Mallory and Irvine on Everest’s North-East ridge in 1924, leaving behind them the mystery of who was first to reach its summit. You can view the first chapter here. Volume 4 is on target for the end of the year.

Knockabout Comics will be sharing the table with issues of Alan Moore's magazine Dodgem Logic and their latest releases in books including the quirky look at money, Lovely Horrible Stuff from Eddie Campbell (Alec, From Hell).

American comic fans will also be able to check out Neil Gibson's 'Twisted Dark' series of books, short tales with that certain twist and a whole series of wonderful new (to me) artists. All three volumes will be available at the booth and a few of his 'soon to be launched' colour comic Tortured Life. You can read 'Tortured Life' for free on Neil's site.

Fanfare's secret weapon for 2012 is that endearing and endurable K9 (www.k9official.com) mechanical dog who first appeared in the 1977 episode of Doctor Who entitled The Invisible Enemy with the fourth Doctor (Tom Baker) and Leela (Louise Jameson). He now has his own brand new TV series created by Bob Baker and Paul Tams and featuring the voice of the original actor, John Leeson. Here's a complete episode guide of the first series.

It was announced recently that it will show this autumn on BBC Kids in Canada and Fanfare will announce the US channel which will air the show on San Diego Preview Night, Wednesday 11th July.

If you are at San Diego, drop by booth 2102 to discover who that is and pick up one (or both!) of our show exclusives: "Top Dog" Tshirt with front and back design (the back is secret until Wednesday) and the detailed 4" collector's resin figurine with signed/numbered collector card.
Posted by John Freeman at 5:15 pm