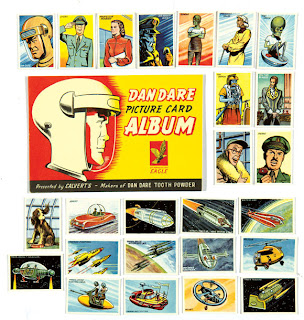 The Spring 2012 auction at Compalcomics is open and includes some terrific Dan Dare artwork and toys, an issue of Eagle signed by Dan Dare co-creator Frank Hampson, Trigan Empire art by Don Lawrence and the first issue of Comic Cuts - published in 1890.

There are 203 lots in this catalogue and Dan Dare rules the interplanetary airwaves with a wonderful collection of comics, artwork and toys.

Offered are two magnificent Eagle artworks from "Operation Saturn", copies of Eagle No 1 and No 52 signed by Frank Hampson, the impossibly rare Dan Dare Figures Set in original box by Crescent Toys and the Horlicks Dan Dare Spaceship Cup and lid which you could only get if you sent off 6d and a jar label in the early 1950s. It’s in mint condition. 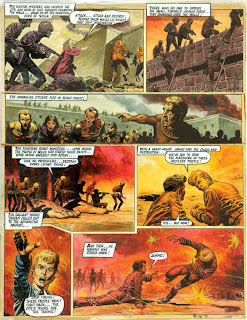 A Space Pistol, and Eagle and Girl Table tennis Set (surely proof of the popularity of the tites in the 1950s), interplanetary Stamp Folder, Eagle Membership Card and letters are some of the other lots from this high grade collection featured in lots 74-93.

Other key artwork boards on offer showcase The Trigan Empire by Don Lawrence, full of action, Thunderbirds by Frank Bellamy, Oor Wullie in a terrible tangle with his pet mouse, Wee Jeemy and a Kit Carson cover from Cowboy Picture Library in 1958.

For those intrigued by the origins of British comics there's the first issue of Comic Cuts, publishd in 1890, alongside a 1901 Sherlock Holmes’ Hound Of The Baskervilles, all episodes collected from Strand Magazine in a bound volume.

Also offered is a very battered Beano No 1 at No Reserve, Beano Books 1 and 2, the first Beezer with free gift Whizz Bang, plenty of early Cowboy Comics to ride the range and Playhour 1 with free gift Red Indian Head-dress to fight them off. 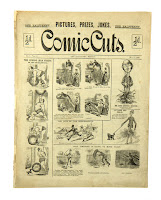 Meet the Saint features in number one of Super-Detective Library and Robin Hood, Black Arrow, Battler Britton and Spy 13 in Thriller Picture Library.

If it's rarities you're after, then Lot 128 has the original printer’s dummy copy of Buster No 1 along with the actual first issue

There's also a bound set of the first 250 issues of 2000AD,  Bionic Woman art by John Bolton from Look-In, Faceache art by Ken Reid and much more, but the Dan Dare items realy need to be checked out by fans. 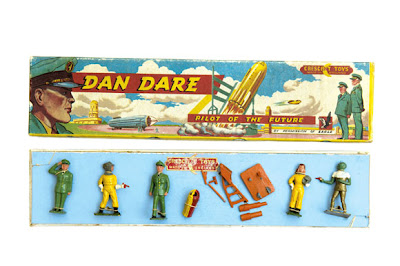 The US section offers an early run of 1940s Classic Comics from #1-42 including key first editions along with Fantastic Four #1 and a good run of Silver Age DC comics.

• Bidding closes on Tuesday 13th March at 8.00pm UK time. To go directly to the main page for this catalogue click here: www.compalcomics.com/catalogue/index.htm
Posted by John Freeman at 12:35 pm