Flaming Heck! It's some new Commandos 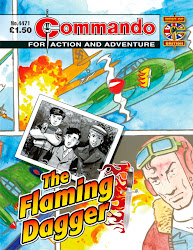 Just because it was Valentine’s Day this week, Commando hasn’t gone all lovey-dovey. Oh no! Four More action-packed tales are now on sale in all good newsagents for adventure fans...

As a 12-year-old living in Paris in the early days of the Second World War, Isaac Vidal hoped that freedom would soon come again to France. He had every confidence that it would for did not his favourite comic have a battling British hero who would thwart the Nazis at every turn?

His optimism was not shared by all, for the Flaming Dagger was a character from fiction and everybody knows that fictitious heroes never win wars. Do they?

December, 1944. In the midst of the German Ardennes Offensive, an American GI — Corporal Joe Wallace — regains consciousness after a skirmish. Suffering from a head wound, he has no memory of who he is or what happened to him and his buddies.

As he fights to regain his memory, Joe has to battle for his very survival… 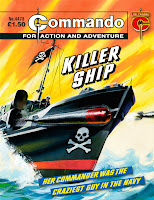 Every night as darkness spread over the Mediterranean, sailors of the German Navy who were on duty grew nervous and uneasy. For this was the time the ghost ship would strike.

Out of the night would roar a sleek, black E-boat with the skull and crossbones flying from its masthead.

And on its bridge stood a British sailor as bold as any pirate of the Spanish Main, Lieutenant Bart Mason of the British Navy — running his own private war.

"1962 was the second year of Commando’s history and they struck gold time after time," notes title Editor Calum Laird of this re-issue. "Writers like Eric Hebden used their full imagination to come up with classic characters and plots, just like here. Eric’s son Alan has the same talent.

"Cecil Rigby’s inside artwork works very well here, with a strong line and skillful use of black for the night scenes. There’s very little you can say about Ken Barr’s cover art that hasn’t been said before, but his capture of the speed of the killer E-boat really is something. You can almost smell the salt and the diesel!

Nick Bonner led a squadron of Curtiss Kittyhawks against Axis forces in North Africa in 1941. They were slogging it out with the Italians for supremacy of the skies. It was a tough fight, but one which was about to take a savage new twist when a ruthless group of Luftwaffe pilots arrived…

"This super air tale from 1987 was written by Alan Hebden, who still crafts many a cracking script for us today," says Scott Montgomery, Deputy Editor. " Interestingly, Alan’s dad, Eric, was also a veteran Commando author. Check out his sterling work on “Killer Ship”, (No 4473) the 1962 classic reprinted alongside this story.

"The inside art here was by the great Jose Maria Jorge, another Commando stalwart, who sadly died in 2010 and is much missed. It’s a small consolation but at least his dynamic, wonderfully-detailed black and white line art is still with us to enjoy all over again."


• Commando Comics iPad App on iTunes
Posted by John Freeman at 9:56 am