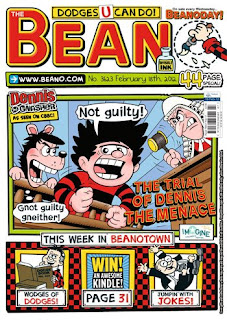 The Audit Bureau Of Circulations, the industry body for media measurement, have released the July to December 2011 sales figures for UK consumer magazines which include British comics. After rather a lot of doom and gloom six months ago when the sales figures for The Dandy in particular appeared to have collapsed, things have steadied for The Dandy while The Beano sales have increased.

Before blinding you with the numbers we should say that the ABC headline sales figures are the average sales for a title over the six month period and include both newsstand and subscription sales for the UK, Eire and other countries.

The Beano headline figures in the last half of 2011 are up by 3% on the previous period to 38333 average sales per issue with the subscriptions included in those numbers up by 10%. 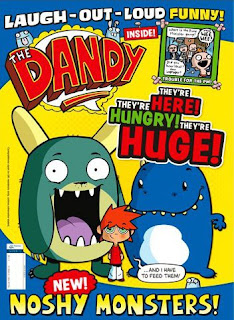 After the shocking drop between the last half of 2010 and the first half of 2011, the headline figure for The Dandy in the last half of 2011 was 7489 average sales per issue, which is still a frighteningly low number but is actually a rise of 0.5% on the previous six month period. While this means that more people subscribe to The Beano by post than buy The Dandy from all the shops in the UK and Eire combined, it is interesting that subscriptions for The Dandy are actually up by 50% on the previous period.

The monthly BeanoMAX headline figures are down 9.6% to 22094 with its subscriptions down by4.6%. The interesting statistic that can be teased out of the BeanoMAX figures is that in other countries, ie outside of the UK and Eire, shop sales of BeanoMAX are almost the same as the shop sales for The Beano and The Dandy combined.

The move from BBC Worldwide to Immediate Media in November 2011 does not seem to have hurt young reader titles such as Toybox and CBeebies Weekly  - in fact many are up on the last reporting period.

Immediate enjoyed an excellent performance across its pre-school portfolio, up 24.1 per cent year on year (y-o-y). This includes excellent growth across the CBeebies portfolio including CBeebies Art, at 63,679, (up 23.4% y-o-y), and from CBeebies Weekly, at 55,516, up 2.2% y-o-y, as well as a strong debut from Octonauts magazine at 61,750. CBeebies Weekly remains the UK’s top children’s title in terms of circulation.

While not a comic, there's good news, too, for satirical cartoon-packed magazine Private Eye, with its sales at 230,000 fortnightly sales. The Guardian notes this is its highest circulation for more than 25 years as it celebrates its 50th anniversary.

Editor Ian Hislop, who credits the recent successes to the magazine's journalists and satirists said: "10% growth in a year, I feel like the chancellor – in his dreams.

"I would like to say it was down to my brilliance but the razzmatazz over the 50th birthday helped and there have been some great issues," he added. "The anniversary issue was a great cover. It was a very special year and a lot of our stories came good, whether it was hacking, or PFI or the Hartnett [tax sweetheart deals] story."

One final batch of figures from ABC that may be of interest are the sales figures for the Sunday Post newspaper (Commando by the way is not ABC rated). This Scottish Sunday paper is the home of The Broons and Oor Wullie and during January 2012 the average sales figures per issue were 302,388 which was made up of 215,861 issues in Scotland, 85,326 in England, Wales and Northern Ireland combined, 823 issues in Eire and 378 issues in other countries. Since it is generally accepted that Sunday papers are read by more than one person, that is a lot of potential readers of Wullie, Maw and the rest of the family.

• The Dandy website is here and subscription details for The Dandy are here.
Posted by Jeremy Briggs at 7:00 am

For a short period The Sunday Post reprinted a page of The Beano and The Dandy. It even gave away a free copy of The Dandy around about April last year.
Sad that it's not continued.

The Dandy is the strongest and most inventive its been for decades and deserves to thrive. It's a shame sales are going the wrong way because it's brilliant. The artwork is innovative and stories are witty and funny.

To be honest, I think the way forward for The Dandy is to slash the cover price to pocket money level or find a sponsor to give it away to schools for a term or two.