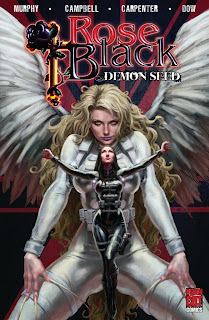 Rose Black: Demon Seed is Rough Cut Comics' newly released follow-up to their 2004 graphic novel Rose Black which told the story of a vampiric angel sent to earth some 600 years ago to battle evil on its own terms and which she accomplished during the Cold War as an agent of the British Secret Service.

There is a contagion sweeping the Middle East that makes people highly aggressive and an MI6 team is dispatched to a Libyan compound believed to be at the centre of the outbreak. Eloise Parrish is a new MI6 agent who joins the special ops team that includes Rose Black but, in the Libyan desert, reveals her truly evil nature to Rose and her partner Dobie. Leaving Rose and Dobie for dead, Eloise returns to Britain with the survivors of the raid as the contagion spreads while Rose and Dobie travel to Scotland to try and discover who this woman with Rose's power, but not her conscience, really is.

The original Rose Black graphic novel had black and white artwork by penciller Jaeson Finn and inker Colin Barr and, between that and a Durham Red-style character, it had a rather nice old-style 2000AD feel to it. With Jaeson Finn having moved on in his career to film work, this second outing for the character is in full colour with artwork by Joel Carpenter and colours by Derek Dow. With the move to a more modern style of digitally coloured artwork the feel of the book moves away from 20th century 2000AD and heads towards 21st century Panini UK territory, albeit rather more violent than any title Panini would release to the UK market. 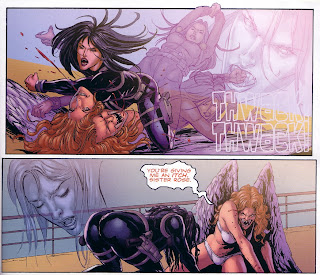 The comparison continues with Panini UK best known for US superhero reprint titles and this book is dominated by its two 'super-powered' vampire/angels as they suss each other out before having several almighty superhero type fights. Indeed Carpenter's dynamic artwork portrays Eloise as a superhero-style statuesque blond who battles her way through her outer clothing as the book continues leaving her only in her underwear for the final battle. Rose, consistent to her character, remains rather more demure albeit it in a tight fitting outfit that proves to be rather more resistant to combat. 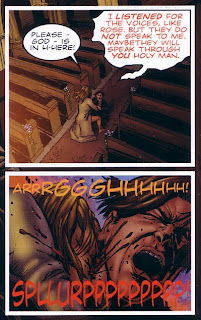 The ending of the first book which revealed Rose as an avenging angel rather than a vampire left writers Ed Murphy and Tom Campbell at a point where they could have taken the story of Rose in many directions. In Demon Seed the religious overtones that made the first book so interesting, but also less commercial, are virtually swept away and replaced with fast moving action and a plot that, in part, echos the Arab Spring uprisings despite having presumably been written before them. Coupled with the new art style, this makes the book feel much more modern than the previous outing for the character.

The book is split into four chapters with four cover illustrations at the back so Rough Cut would have had the ability to release it as four comics as opposed to one graphic novel. Of those pin-ups one is the superb image by Carpenter that is used as the book's cover, while another is a similar but more touching image of Eloise cradling an unconscious Rose by original artist Jaeson Finn which makes for a nice link between the two books.

Rose Black: Demon Seed is a tale of the Rose character with a much more modern feel to it than the original and, while I miss the old style of art and plot, this is much more commercial approach that should pay dividends for Rough Cut Comics amongst the superhero reading fraternity.

There are more details about Rose Black: Demon Seed and other Rough Cut Comics titles on the Rough Cut Comics website and blog while more illustrations from the book can be found on their Facebook page.

The downthetubes review of the original Rose Black graphic novel can be found here.

Rough Cut Comics will be appearing at Thought Bubble this weekend, 19/20 November 2011, and their table is located in Savilles Hall.
Posted by Jeremy Briggs at 7:00 am