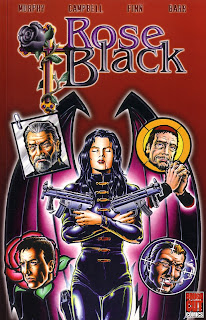 She is a vampire who is 600 years old and doesn't know why her lonely, endless life began. Such is the character of Rose Black created by Edward Murphy and Tom Campbell in Rough Cut Comics' Rose Black graphic novel, written by Campbell, pencilled by Jaeson Finn and inked by Colin Barr.

Rose has been in a French convent for decades, hiding from the world and her recent past as an agent for the British Secret Service. When a special forces team infiltrate the convent and attempt to kill her, she returns to her former spy partner, Raymond, in an attempt to understand why she is now being targeted. Teaming up with a new, younger partner, Dobie, Rose finds that their investigations lead them to the Vatican and Cardinal Bochour who is trying to eliminate the woman he considers to be the world's only vampire. 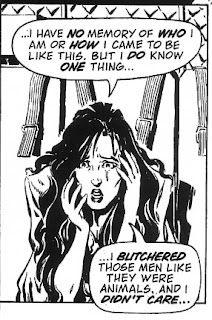 As a character Rose is a cross between Marvel's Black Widow and 2000AD's Durham Red, and not just in the similarity of the names. She is a former secret agent who is a vampire in a world in which vampires don't exist. Beginning with her as a nun, the plot slowly reveals her secret agent background as we discover more about both her and the people around her, from her former spy partner to the Vatican sect who are trying to kill her.

While the book is very violent at times, Rose is not a character who is simply out to kill and, while she is very good at killing, writer Campbell gives her a Christianity-based conscience that means she tempers the use of her demonic powers as best she can, generally only using them for self defence. The reason for those powers, and why she appears to be a vampire, is left to virtually the last page of the book and provides a very neat twist that I, for one, didn't see coming. 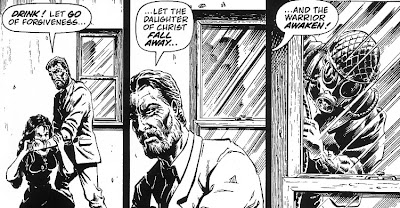 The black and white artwork has a nice 1980s 2000AD feel to it and while the lack of colour reduces some of the impact of the violent deaths her enemies meet, this is probably a good thing. Throughout the story penciller Finn's page layouts are impressively dynamic and, while the finished artwork feels a little rushed on some pages, where the story needs the artwork to make a visual impact it always does, leading up to the climactic impact of who and what Rose actually is.

For a first graphic novel from a small press company, Rose Black is very impressive package and left me wanting to read more about the character. Based on reports on the Rough Cut website and their blog, I won't have to wait long as a second book, Rose Black: Demon Seed is due for release very soon.

There are more details about Rose Black and other Rough Cut Comics titles on the Rough Cut website.

There are more details of the upcoming Rose Black: Demon Seed on the Rough Cut blog.
Posted by Jeremy Briggs at 7:00 am