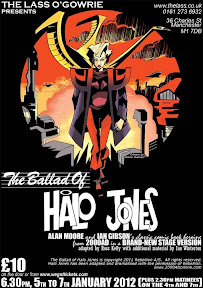 Manchester's Lass O'Gowrie pub - already famed for its comics and Doctor Who-related events - is staging Alan Moore and Ian Gibson's The Ballad of Halo Jones as a fringe play in January next year.

"It's an adaptation of the first two books using the ground floor or the pub as the set," landlord Gareth Kavangah tells us. "Rebellion have approved it and Alan Moore has given it his blessing too, which is lovely.

"We cast a week today and costumes will be provided by the students from Manchester Metropolitan University."

The play is being staged as part of the pub's inaugural Midwinter Lassfest fringe festival. Other treats to be staged include an adaptation of Russell T Davies' Midnight, beer tasting with Neil Morrissey and live episodes of Coronation Street from 1968, staged in the pub as part of a Jack Rosenthal season.

First published in 2000AD, The Ballad of Halo Jones has been brought to the stage before. In fact, the first stage play was directed by my partner back in the 1980s, Clare Walters and I did all the PR materials for it based on imagery from the original comic.

This first adaptation - more info on this web site - was first performed by In The Red Theatre Company at the Edinburgh Festival in 1987, and then taken on a UK tour.


• More info on the Lass, as ever can be found at http://www.thelass.co.uk/ and Lassfest at the (soon to be updated) http://www.lassfest.co.uk/