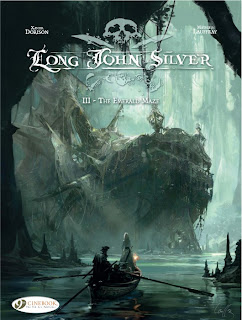 Lady Vivian Hastings' husband has found the fabled treasure city of Guiana-Capac in South America and sent the native Moxtechica to England with a request for her to hire a ship and crew and come to him. Vivian hires John Silver and his pirates so that she can take control of the Neptune from its rightful captain when she needs to and, during an immense storm, Silver has lead a bloody mutiny. 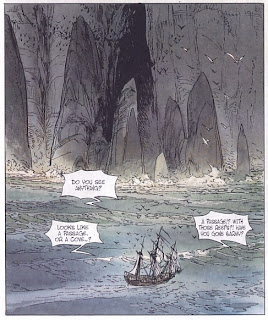 In the quiet aftermath of the storm, Silver takes the captaincy of the Neptune and navigates the ship from the ocean, between the sea cliffs and into the rivers of the continent. As the Neptune sails upriver through the rainforest to find the lost city and the Nimrod, Lord Hastings' ship, and its crew, the Neptune's crew have to face the challenges of this new and unknown continent.

Quite how a ocean-going sailing ship can sail against the flow of the river when surrounded by towering rainforest trees is not something to dwell on here as the fast moving action of the previous book turns into a relatively relaxed quest through the emerald maze of the rainforest in search of the Nimrod which, considering it is on the front cover, we already know that they will find. Yet despite this the story maintains its grip on the reader as this part of the ongoing story becomes an exercise in characterisation and scheming. 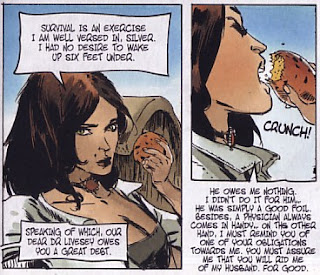 Writer Dorison brings Lady Vivian back to the fore after sidelining her somewhat in the previous book as she reasserts some authority amongst the pirates and impresses even Silver. It is she who boards the hulk of the Nimrod to find her husband's journal that tells of the final days of the ship while the Neptune's crew investigate the buildings on the shore. Artist Lauffray delivers a quite beautiful painted cover while his internal art maintains the quality of the previous two books with striking two page spreads to indicate the vastness of the ocean and, once through the dangerous sea cliffs, the vastness of the interior of the South American continent with its rainforest.

Unusually for Cinebook the next album in the continuing Long John Silver series has not yet been published in French. Indeed at the time of writing it is not even listed as a pre-order on Amazon.fr, although Amazon.de gives a German release date of March 2012, and it is therefore not scheduled by Cinebook in the first six months of 2012. That seems a long time to wait for the next book but it is, of course, typical of the gap between the French albums.

Long John Silver - The Emerald Maze maintains the quality of the previous two books in the series while setting the scene for the fourth book that, based on this one, will be highly anticipated.

• There are more details of the Long John Silver series, along with preview pages of each book, on the Cinebook website.

• There are more details of the original French language versions of Long John Silver on the Dargaud website (in French).

• There are more details of Mathieu Lauffray's artwork on his website and many Long John Silver illustrations on his blog including this step-by-step image of his excellent Emerald Maze cover. 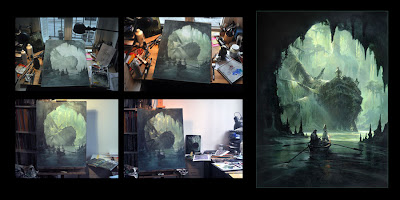