The Phoenix Issue Zero Via Waitrose 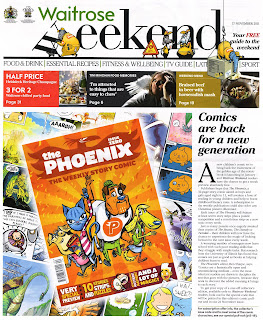 The first issue of the new Phoenix comic is due to come out on at the start of January 2012 however Waitrose supermarket customers are being given the change to get a sneak preview with a printed copy of the Phoenix Issue Zero.

The current issue of Waitrose's free weekly Waitrose Weekend publication has The Phoenix featured on its front cover and a four page centrespread pull-out all about the new comic. In addition there is a printed code in the pull-out that, when put into the appropriate page of The Phoenix website, allows readers to get a free copy of the preview issue zero.

Emphasising the University of Illinois' findings that comics are as good as books at helping children to read, the Waitrose Weekend describes Phoenix as "published weekly at £2.99, the 32-page comic has at least seven story strips in every issue, plus a puzzle competition and a non-fiction strip on a new topic each week." Phoenix editor Ben Sharpe is quoted as saying, "We're making The Phoenix for all 8- to 11-year-olds; boys and girls. But really it's for everyone. Children will have their favourite strips, but so will kids in their 30s, 40s, 50s and beyond!" 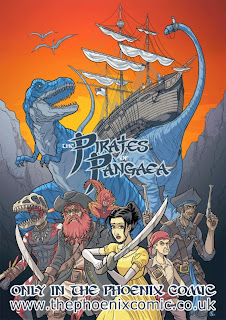 It also gives details of various subscription options for The Phoenix ranging from a full year down to a five issue taster. These are also available on the subscriptions page of the The Phoenix website.

There are more details about The Phoenix on the comic's website.

The Phoenix Issue Zero is available by entering the Waitrose code and your details into the Waitrose page.
Posted by Jeremy Briggs at 7:00 am