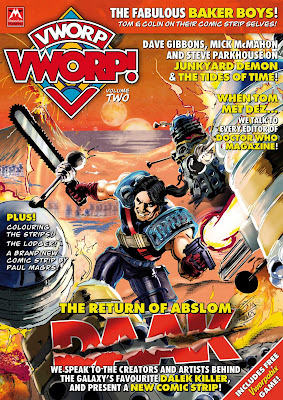 The second issue of the amazing Doctor Who fan magazine Vworp Vworp - a fanzine about the long-running and best-seling Doctor Who Magazine - is on sale now.

Quite simply, if you are a fan of Doctor Who and Doctor Who Magazine, you should get out there an buy this, because it's brilliant - and not just because of the freebies that come with it.

Apart from anything else, it includes an all-new comic strip featuring the Dalek killing anti-hro Abslom Daak, created by Steve Moore and Steve Dillon. More to the point, it's written by Steve Moore and drawn by longtime DWM comic artst Martin Geraghty and worth the cover price alone.

Contents also include
Vworp Vworp 2 comes with two covers: a wraparound Abslom Daak cover by Mike Collins, and an early Doctor Who Monthly pastiche featuring Junkyard Demon (with Jason Fletcher and Ben Willsher’s take on Daak on the back.

Plus, there's a fantastic free gift in the form of a ‘Vworpabix’ board game. Based on the 1970s Weetabix game, Vworp Vworp's has 16 character cards by Adrian Salmon and boards by Paul Grist, Jon Pinto, Leighton Noyes and Graeme Neil Reid.

A very limited edition magazine, you can order it here from the Vworp Vworp web site.

It's totally brilliant - so get out there an grab one while you can.