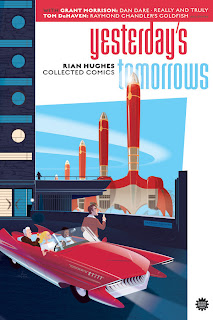 Yesterday's Tomorrows, a collection of comics by "luminescent pop culture demon" Rian Hughes spanning over two decades of his career, is being re-published in the US by Image Comics in November.

Previously published by Knockabout Comics in the UK

in 2007, the 264-page collection features two infamous and hard-to-find collaborations with Eisner Award winner Grant Morrison: Dan Dare, a post-modern classic that sets the aging and retired iconic British character Dare against a modern British landscape he no longer understands; and Really and Truly, a high-octane psychedelic road-trip torn from the pages of cult comic 2000AD.

Rian is an award-winning graphic designer, illustrator, comic artist, logo designer and typographer. He studied graphic design at the London College of Printing before working for an advertising agency, i-D magazine and a series of record sleeve design companies. In 1994, he founded his own studio, Device, and has since worked with a wide range of international clients in publishing, advertising, music and fashion. He has also worked extensively for the British and American comic book industries, both as artist and designer.

Rian also has a number of books about different aspects of 20th century design scheduled for release from Fiell Publishing Limited, either already published this year or due for publication soon. Out now is Lifestyle Illustration of the 60s

(Amazon UK link), a survey of magazine artwork from the Swinging Sixties. Featuring over 1,000 gloriously inventive and stylistically diverse illustrations, it offers a fascinating insight into the extraordinary artistic talents of the illustrators featured, it also reveals the social aspirations of this unprecedented era of political optimism and sexual freedom.

Complementing this release is Lifestyle Illustration of the 50s

(Amazon UK link), also due for release in November, an overview of the astonishing artistic skill of the leading lifestyle illustrators of the period, revealing the changing social aspirations of the post-war generation and their growing optimism for the future.

Out in October is Custom Lettering of the 40s and 50s

(Amazon UK link) is a celebration of the stunning and stylistically varied headline lettering that predated modern computer type. Each a unique one-off, custom hand-drawn lettering had a stylistic freedom and creative energy unfettered by traditional typographic rules and regulations.

The handbook features over 4,500 examples of custom lettering - from urgent rough block capitals to sophisticated looping copperplate scripts, elegant fashion brush scripts and dynamic illustrative sans serifs, the extraordinary range of graphic styles is as exciting as it is stylistically diverse. It should appeal to typographers, graphic designers and, of course, retro culture fans, lettering aficionados and printed ephemera collectors.

• Fiell Publishing Limited
Posted by John Freeman at 8:18 am