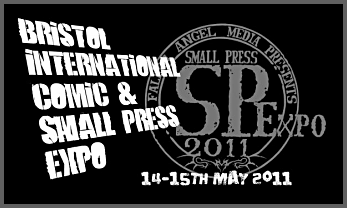 Again organised by Fallen Angel Media, next year's show will be on Saturday 14th and Sunday 15th May 2011. Guests are already being signed, events are being finalised and the show is now larger than ever, this time covering the entire floor of the venue with three extra exhibitor and trading spaces and eight extra event areas. making it the largest independent and small press show in the country.

Fallen Angel were delighted with this year's event, which attracted visitor numbers double that of 2009 and they tell us they're working hard to double them again for 2011.

In addition, following the unfortunate demise of the London Thing, Team SPExpo announced last month that they will be running a London Comic and Small Press Expo, to be held on the 12th March 2011, offering all the best in the Indie, Small Press and Web Comix world as well as events, special guests and a whole lot more.For more info, visit: www.spexpo.co.uk