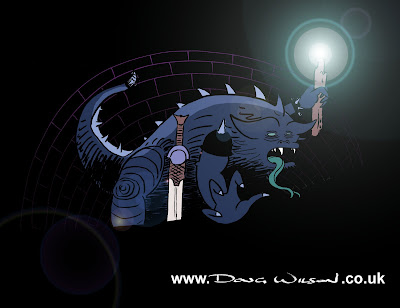 Bloodwhat, the online comic creation of Worcester film-maker Douglas Wilson, has recently reached the story's conclusion after an impressive regular three times a week schedule for the past year and a half.

With some 6000 views per month, the comic has just shy of 200 strips of fantasy spoofs, parodying a 1980's computer game which Douglas grew up playing. He now hopes to compile a book from the now completed story and is using fundraising site IndiGoGo to pre-order copies with incentives for donators, including a credit in the final printed book and original artwork from the comic.

Creator Douglas Wilson is an animation graduate of the University of Central Lancashire who has worked on the feature film Billi the Vet in Glasgow and Rocket Jo in Angouleme, France. Currently working freelance from Worcester in animation and illustration, he runs two regularly updating web comics, K-9 Lives and Bloodwhat. He's also writing and drawing a graphic novel, The Von Spleen Experiment.

The strip's web site recently underwent a re-design, bringing a bit more personality to the look. "I've made the menu bar quite playful and amusing and hopefully having that same link panel across the whole site makes navigation a little simpler," Douglas explains.

"I also wanted to add hand written notes explaining a little more about what I am trying to do with the site and its contents [and] back-up the handmade, personal aspect of my work in the design."

• Check out comics at: www.dougwilson.co.uk
Posted by John Freeman at 4:20 pm