The latest batch of titles from DC Thomson features the first three books in Commando’s six-book 'Aces High' salute to the RAF on the 70th anniversary of the Battle of Britain.

Included in the reprints is Mustang Ace, John Ridgway’s first ever Commando book, first published in 1971. At the time he had a day job and it took about four months of evening and weekend work to complete. He used very think board back then and the stack of art stands about six inches high! John has gone on to establish himself as a fixture in the British comics world and the Commando team like to think that DC Thomson gave him a helping hand in the beginning.

The remaining three books in the 'Aces High' series will be released on the 16th September. The SOS came through weak and distorted by static. An American survivor of one of the many battles of the Pacific war, calling for help from a lonely island.

Radio operator Eric Aburto aboard PT Boat 1101 heard the message and knew he had to go to the man’s aid -- not only was he a fellow US serviceman…Eric was sure he recognised a voice from his past! 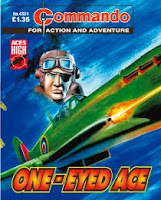 Newly-commissioned Pilot Officer Johnny Dangerfield dreamed of racking up the five kills needed to call himself an ace -- and was determined to face anything the Nazis threw at him to do it.
However, it was to be the actions of one of his own squadron’s pilots that would cause him to lose an eye and Johnny’s dreams of being an ace would be over... Or were they? An ace... that’s what Joe Jennings was, one of the few gifted pilots who could make his kite do anything but talk. Nobody believed there was a Jerry alive who could match Joe in combat.

Yet the day did dawn when Joe was shot down in flames. And how it came about makes a fantastic story. When Squadron-Leader Alec Scott in his old, lumbering Gloster Gladiator was set about by a flashing Messerchmitt 109, it was David and Goliath all over again.

This time David needed more than a sling to down Goliath -- but the big ’un was cut down to size just the same!

I really love the Commando magazine. Its format and its stories are greats. You sometimes guess what will come due to the restrictions of the so long established rules of writing the 135 panels.

What hit my heart now, it's the European subscription price for 6 or 12 months. It has risen to an extreme level that I can't afford to spend my money on this mag again.