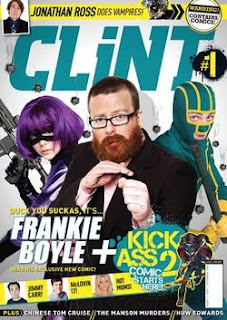 (Updated 1430, 9th September): Sales of CLiNT #1 and reaction to the new British comic magazine have been very positive, according to its creator Mark Millar - and he says more retail outlets are seeking copies, including supermarkets, which account for almost 40 per cent of magazine and newspaper sales in the UK.

"The good news is that this has gone down a storm," Mark told his fans in a post on his forum yesterday.

CLiNT #1 went on sale across the UK in a fanfare of publicity, including a signing by Jonathan Ross and Mark Millar at WH Smiths in Victoria Station, London, covered 'exclusively' on Sky News and coverage on other TV channels.

"[WH] Smiths and Tesco said they're having a great response," says Mark, "and finally - finally - a comic is generally being stacked alongside car, lifestyle and other traditional men's interest mags.

"For too long they've been sticking 2000AD etc next to the Teletubbies on the bottom shelf," he claims, "but now we're at eye-level and it's paying off."

This isn't of course, strictly accurate - most WH Smiths have dedicated sections for 'teenage' titles, including 2000AD, Panini's Marvel Comics collections and similar titles. Where things fall down is when staff at a local WH Smiths don't follow shelving instructions and rack a title like CLiNT in with junior comics (in one instance, next to Bob the Builder. Another problem for the visibility of many long-running British comics is that they are more likely to be ordered by a customer, so they become what's known as 'put aways' - and then there are no copies to be seen on a shelf.

(Commando, whose 40,000-strong audience is incredibly loyal, with publishers DC Thomson claiming many readers sticking with the title for over 10 years and 2000AD have this problem).

But this is nit-picking: the important thing, as far as Mark and publishers Titan Magazines are concerned is reaction to CLiNT outside the comics community.

"Response from new readers, which has been over 90% of our emails received so far, has been amazing," Mark says. "They picked it up because it didn't look like a traditional comic and found themselves loving the comic strips, which was exactly the plan.

"So me, Titan and all the dudes working on this are very happy. We're in 90% of the Smiths outlets and going up to 95, more supermarkets now jumping on to see what the fuss was about."

Responding to comic fans appeals for comic-oriented features rather than the lads mag-style material published, Mark is adamant that this is the wrong approach if comics are to break out of their perceived 'ghetto' on the news stand.

"I want no more silly responses here where people say it looks like a lads mag," he chastises. "That was kinda the plan, as it got us different shelves and a new audience.

"It's been 25 years since the mainstream really looked at a mass market book that wasn't an outright funny book," he continues. "This was very, very calculated and so far - touch wood- seems to have worked... CLiNT is a pop culture hybrid that gives them something they know with something they haven't tried before.

Elsewhere, in an interview with the denofgeek web site, Mark has enthused about his fellow creators on the magazine - who include Jonathan Ross and comedian Frankie Boyle.

"In our launch issue we've got the highest paid man in British telly, and probably the biggest comedian in the country, and their combined profile helps enormously, because it shows people we really mean business," he says.

"In fact, I think the reason British comics often fail is that mainstream retailers really don't care about me, or any other British or American comic author. You can come up with the best idea for a character and story and nobody with the shelf space will care. So, the trick is to get some big names that retailers recognise to author some comics.

"Having Kick-Ass 2 launching off the back of the DVD release helps, but having Frankie and Jonathan, and some of the writers we've got coming later too, that's really going to get us in shops, and hopefully it'll help create a platform for new talent as well."

• Read the downthetubes of CLiNT #1, which includes links to other reviews and news stories about this new launch

• Discuss CLINT #1 on the downthetubes forum (membership required)
Posted by John Freeman at 10:06 am

That sounds like excellent news. Of course the real test is whether they come back for issue 2 and if Turf and Nemesis can keep on schedule long enough for CLiNT to reprint them. No sign of the third issues of those titles yet which is worrying.

Yes, there do seem to be concerns that some of the material CLiNT is running hasn't been published in the US (for those who don't know, some of the strips in the title are also being published in the US at about the same time). Let's hope they are overcome. I can't see a fickle public being as tolerant of late-running magazines, or finding the strips they've been following replaced with something else for an issue, as, perhaps, comic fans are.

Just as an update, in the denof geek interview (added as a link in the news story, above), Mark says "Nemesis #3 should be off to the printers very soon, and issue #4 will then wrap the first edition of that up."