Yes, they're really calling it CLiNT 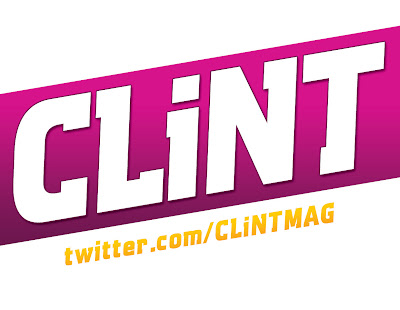 Millar’s sequel to his cult comic and smash hit movie will also feature in the monthly title to form a stunning line-up of stories, which debuts 2nd September in the UK and will be on sale in British newsagents as well as specialist comic stores.

The Jonathan Ross strip will first serialise his Image comic Turf, drawn by Tommy Lee Edwards, before moving on to new material. Comics news site Bleeding Cool reported back in May that the Frankie Boyle strip is likely to be the Hereditary/Project Bloodline concept about the descendant of FBI’s Top Ten Wanted supervillains on the run.

"This is The Eagle for the 21st Century,” declares Millar, whose genre-busting Kick-Ass scooped the number one movie spot in the US and whose previous work includes Wanted, starring Angelina Jolie and Morgan Freeman.

"I’ve worked on everything from Spider-Man comics to the Iron Man movie for Marvel in New York, but what really excites me is the gap I see in the UK market at the moment. There are absolutely no comic-books aimed at 16-30 year old guys and I think CLiNT has potential to make an enormous impact, bringing a new type of magazine to a new generation.

"I want this to be edgy and irreverent, the kind of thing guys will be passing around lunch-halls and common rooms, and there’s nobody I’d rather have creating new characters for CLiNT than Jonathan and Frankie," he continues. "They’re both brilliant writers and will surprise a lot of people with this stuff.

The last thing you’d expect from Jonathan, for example, is a vampire strip, but he pulls it off amazingly. People are going to love this."

Millar is also launching his sequel to the hit Kick-Ass movie in the first issue of the comic. Kick-Ass 2: Balls To The Wall has been scheduled for production in 2011 for a 2012 cinema release, but fans of the first movie can find out what happens two years in advance by picking up CLiNT.

The 100-page magazine will be packed with interviews and features from movies, games and television as well as four serialized comic-strips. The biggest names in entertainment will be featured every month and some will even be sticking around to write sci-fi, humour or horror stories after they’ve been interviewed and quizzed.

“We can’t say who else is involved at this stage,” says Millar. “Jonathan, Frankie and I will have our stories serialized over the first six months, but we have the most insane line-up of creators ready to come in and join us. You’d be amazed how many people who work in film and television want to be comic-book writers. It’s very exciting and we think we’re creating something potentially enormous here.”

Further information on who is involved can be found at twitter.com/clintmag and Facebook, where future developments will be revealed on a regular basis.

• CLiNT #1 is on sale 2nd September in the UK from all good retailers and specialist comic stores. Available in the US by subscription. For future exclusive information on CLiNT, follow twitter.com/clintmag

• A CLiNT wallpaper to brighten up your desktops
Posted by John Freeman at 5:09 pm

I'll be honest, I don't think Clint is doing anything new for the comic scene, I dont think its going to appeal to the 'new generation' of comic readers, because the majority of people I know from this new generation are female and reading stuff like Persopolis, Blankets and Fun Home, and various drama/character driven...
It's nice that they're making the effort to try get comics into the main stream again, but from what I've heard they're just making another comic magazine centered around sci-fi/super hero/action blahblahblah.
The only reason comics have gained a wider audience in recent years is because a few people have decided to break away from that young male, action orientated stereotype. I'm pretty sure it was the more complex and clever japanese comics, and definately the more 'female' shojo comics which boosted the whole manga scene. And nowadays in the UK the kind of comics I see really being passed around are ones associated with the new 'topshop' generation, people are interested in 'indie' scene, more creative and art orientated mediums, that includes the indie comics!!
That is what the 'new generation' of comic fans are, they're not geeky any more, not just into super heroes or action, they are definitely just normal teenagers who now expect to see comics catered to all genres and tastes. I dont think Clint is doing this!! But, I guess I wont complain too much, I'll have to wait and see what the actual comics are like, but from what I've heard I dont think its going to go any further then your average comic shop geek!

Those are some interesting thoughts, Bex: as you probably know, girls comics once outsold boys comics on the UK news stand, but died a death in the early 1990s along with much of the teen comic market titles not based on a licensed property.

(Pat Mills has long argued for collections of material from girls titles such as Misty and Tammy).

The problem with manga for a UK magazine publisher is that you have to run a huge chunk of it in a magazine for it to make sense (and as someone challenged to run Akira in a monthly title back in the 1990s, I know how impossible that is), and no UK publisher is going to commit to the kind of telephone directory publishing that dominates the Japanese news stand. Of course, you could create a faux manga title with shorter strips - the DFC certainly had its manga influences - but if you wanted to pitch it at the female market you'd be up against huge and fierce competition from the pop magazines and other titles that have a stranglehold on the market. Which is not to say the kind of title you're suggesting is impossible, but it is at present easier to 'sell in' a male-oriented title, where there are still proven sales (2000AD, Ben 10, Commando, Panini and Titan's US comic reprints) than try to reach what would be an all-new one - for the news stand, at least, which is where your profits would hopefully be.

I'd love to be proven wrong, of course, and if there were some enterprising souls out there considering creating an anthology comic along the lines Bex seems to be suggesting I'd be more than happy to take a look at it. I agree, the number of women reading comics reading comics thanks to manga is clearly on the rise, evidence by a welcome increase in women at comic conventions - but I'd argue a news stand publisher will see the comics convention fan base as niche, not mass sale...

I do wish Mark Millar would stop comparing Clint to Eagle. The Eagle was strait-laced adventure and I doubt it ever had the kind of material that strips like Kick Ass and Turf contain. Clint sounds more like Action or VIZ to me. Let's hope it doesn't go the same way.

The whole CLiNT project sounds good to me - when Pete Nash was doing Striker comic and seeking investors, they all advised him to turn the title into a more 'magazine'-like product, a concept they understood as investors. The Megazine has taken this direction and while some have balked at its higher cover price, it does seem to work as a package.

I used to sneakily read my sister's MISTY and TAMMY as a kid. Good comics, usually written and drawn by the same geezers doing 2000AD, Battle, Action, etc.

I think people need to give Clint a chance. For all that Mark tends towards the Irn Bru fuelled hyperbolic i do think his heart is in the right place on this one. Of course there is a commercial element to it but do any of us doubt that no matter how successful it is people like Mark, Jonathan, Frankie et al (whether you like their work or not) couldn't earn more opening a box of cornflakes than writing for comics. i genuinely think this is something they just want to do. The trick will be converting that big name pulling power into decent comics and ones that don't end in the graveyard of poor celebrity projects like, say, the vast part of the Virgin comics line.

As to content give it a chance - Titan are smart publishers and Mark's about as wired in as you get - i'm sure they will adapt it as it goes. I bet there is a t least one major non genre work appears quickly here. Personally I hope it's a huge success - can't harm comics and to see people with star power and high earnings potential wanting to invest their time in a project like this makes me remember the comic fan inside me.

"I’ve worked on everything from Spider-Man comics to the Iron Man movie for Marvel in New York, but what really excites me is the gap I see in the UK market at the moment. There are absolutely no comic-books aimed at 16-30 year old guys"

2000AD, the Megazine, Panini's reprints of Marvel/DC are even more this age range. I would have thought the gap in the market was the 9-14 year olds. Too young for Tharg, too old for Ben 10.

I'll give Mark a slagging effortlessly but on this, I think CLiNT is going to be a lot better than people expect it to be. It'll also be successful. Combined with Strip, and the 1,200+ titles, I think we're in for some very interesting comics in 2011.

Apart from advertorial for TV properties there is virtually nothing for boys or girls aged 7-14 in the UK market, but I don't think a mag written, drawn and edited by 30/40-something comics fans is necessarily going to address that. And a monthly schedule is too long to wait between issues for kids - weekly works much better.

John, there are quite a few 'crossover' manga that could work in UK boys' mags and appeal to girls - but there are also many unexplored areas, like short-form strips (yonkoma,) that could be used to break the stereotypes that Western publishers are still forcing manga into.

Then there are all the comics for kids created in France, Belgium. Spain, Italy... if we cast our nets a bit wider we could create a terrific weekly mag that would appeal to a wide range of boys and girls, using translations alone. As Bex points out, there's so much more to comics than US-inspired superheroes and hardboiled fighters.

I wish CLINT the best of luck, but it would be nice to see some other new titles aimed at different readers.