The new batch of Commando titles commemorate V-J Day, the victory over Japan and the ending of the Second World War 65 years ago this month with stories all set in the Far East and Pacific Theatre of Operations. 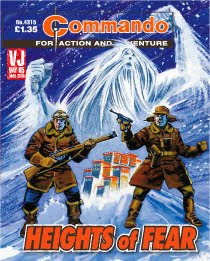 Issue 4315: Heights Of Fear
Story: Alan Hebden
Art: Carlos Pino
Cover Art: Carlos Pino
Flying vital military supplies between India and China during the Second World War was not a job for the faint-hearted. The planes of the day only just had the power to climb over the mountains of “The Hump” that barred the way — and that was on a good day. If you crashed, your chances of survival were slim and rescuers were unlikely to find you. But someone found Flying Officer Steve Long and his co-pilot Flight Sergeant Dave Trimble when they baled out. Someone and something… 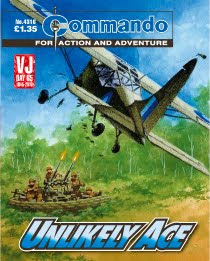 Issue 4316: Unlikely Ace
Story: Ferg Handley
Art: Olivera
Cover Art: Ian Kennedy
After months enduring the stifling heat and ever-present danger of the Burmese jungle, Flight-Sergeant Joe Griffin and his RAF Regiment platoon now had a to stage a fighting retreat from the advancing Japanese. All of his lads, right down to cooks and mechanics, were determined to fight. All except one - Lieutenant Peter Clarke, the arrogant pilot of their Stinson L5 reconnaissance aircraft. He wouldn’t even pick up a rifle, let alone fire one. 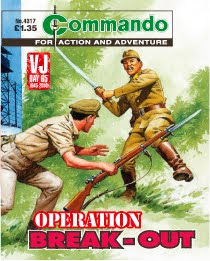 Issue 4317: Operation Break-Out
Story: Ian Clark
Art: Gordon Livingstone
Cover Art: Ian Kennedy
Originally No 2879 from 1995
August, 1945 - Japan was being forced to surrender and after six long years, the Second World War was over. For many thousands it had been a bitter, hard fight on land, on sea and in the air. For Canadian army doctor Harry Murray, this war had started when the Japs had over-run Hong Kong in 1941. That was grim enough, but then he found himself a prisoner on a small, nameless island where men could die at the whim of the enemy guards. The only hope in the end for Harry and his mates was escape… 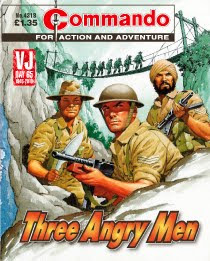 Issue 4318: Three Angry Men
Story: Ian Clark
Art: Benet
Cover Art: Ian Kennedy
Originally No 2880 from 1995
August, 1945 — Japan was being forced to surrender and after six long years, the Second World War was over. For many thousands it had been a bitter, hard fight on land, on sea and in the air. For three battle-hardened NCOs - a British infantryman, a Gurkha and a Sikh - their worst moment had come when a fanatical Japanese regiment wiped out an ambulance train, murdering their wounded relatives and friends. Despite their differences, the three angry men united to hunt down the killers… and collect a debt of blood!