A trailer for the Louis – Night Salad graphic novel, created by Scotland's fab folks metaphrog, is now live on YouTube.

"Our friend hey from Berlin has made an amazing soundtrack inspired by Bach's beautifully emotive "Air on a G-string" and also by Delia Derbyshire's version," the team tell us. 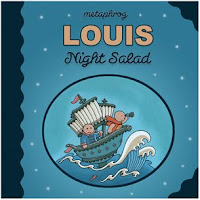 Due for release in Octobr, Louis - Night Salad is a brand new stand-alone graphic novel, the moving tale of Louis’ quest for a cure to save his friend FC. It's descibes as a simple story of friendship, heart-warming and genuinely transporting.

metaphrog are the duo Sandra Marrs and John Chalmers, creators of the critically acclaimed, multiple award nominee Louis series of graphic novels. Other titles include Strange Weather Lately and The Maze. They've also contributed short stories and illustrations to various publications, and enjoy spreading the word about comics at festivals, libraries and schools.