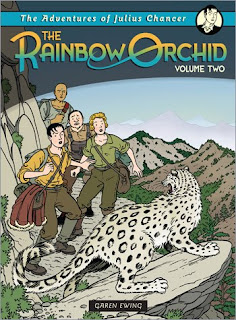 Garen Ewing's fab all-ages adventure comic The Rainbow Orchid is to be published in the Netherlands by Silvester Strips.

Marking the first official European collection of the ligne-claire-styled saga, it will be released in three parts, with volume one at the end of September 2010, volume two in January 2011 and volume three in May 2011. (Volume 2 has just been released in the UK: read our review here)

This follows the lead set by the book's UK publisher, Egmont, who acquired the comic in 2008 and published the first volume in July 2009. The third and final volume of the story should appear at about the same time in both English and Dutch early in 2011.

Dutch comic publisher Silvester Strips whose books include Dutch editions of titles such as Dylan Dog and Bone.

"I'm delighted to be working with Silvio Van Der Loo and his team at Silvester Strips, and I understand that I'm lucky enough to have one of their best translators, Mat Schifferstein, working on the books," notes the book's author, Garen Ewing, who has just completed work on the script for the third volume of the adventure story. "I owe huge thanks to Oliver Munson, my agent at Blake Friedmann, for making this deal happen." 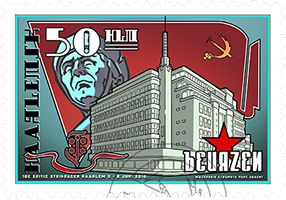 Garen will be travelling to the Netherlands to appear on the second day of the major Dutch comics festival De Stripdagen 2010 in Houten, on 26th September, to launch the book, the day after appearing with comic creators Dave McKean and Robin Etherington at the Bath Festival of Children's Literature.

• The Rainbow Orchid: Adventures of Julius Chancer Volume One