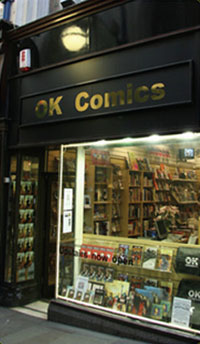 Comic fans around the UK and beyond - including TV and Radio presenter Jonathan Ross - have rallied to try to stop a popular Leeds-based comic store, OK Comics, from going under after building work caused a huge drop off in passing trade.

People who have visited OK Comics in Leeds over the last couple of weeks will have noticed scaffolding outside the shop as Thornton's Arcade, owned by a private company, renovates the area.

Unfortunately, the work is causing havoc for the award-winning comics retailer.

"The ongoing work, the presence of scaffolding, workmen, dust and noise has had a massive negative effect on the amount of people visiting our shop," says owner Jared Myland.

"The work was due to start in February when it would have least effect on trade, and last for six weeks in total. The work was to be carried out in three stages, two weeks per stage... this hasn't happened.

"The first stage of the work started in June and is now moving into it's fifth week. It's not known how long it will last."

The ongoing work - and the uncertainty over how long it will last - means the shop could go under, but now fans across the globe - including TV presenter Jonathan Ross (an ex comic shop owner himself) - are rallying to urge fans to support the store, relaying Jared's appeal for custom via comics sites such as Geek Syndicate and Bleeding Cool, twitter and facebook.

"There is a bare minimum the shop needs to take to continue trading," says Jared. "The reduction of income because of the renovation work has, in one month, damaged OK Comics very badly, and threatened our ongoing existence.

"Our regular customers have been great, enduring the restricted conditions to continue buying comics and graphic novels from us," he continues in a much-republished online appeal. "But we've lost pretty much all our passing trade and all our casual browsing customers. New customers have dried up almost completely.

"OK Comics has never been about making money," he comtinues. "It's important that the bills get paid, staff get wages, and that stock is paid for. But it's not a high profit venture. It's about comics, and the people who read them."

If you can help OK Comics by buying from them online, that's going to help the store, which was the first shop ever to be honoured with the Retail Legend Award in the Leeds Retail Therapy Awards, voted the outright winner by the city’s shoppers over other shortlisted shops - including Marks & Spencer.

"We'll continue to sell back issues for 50p (we recently acquired two great new collections), says Jared, "and we'll be running sales and special offers daily over the next few weeks... We'll continue to receive new comics and graphic novels regularly every week."

If there is a book or comic you were thinking of trying, do OK Comics a favour and try it now. If you've ordered something and have yet to pick it up from them, do it today. If you live in the Leeds area and shop at OK Comics, recommend them to your friends. If it's been a while since you collected your standing order from OK, do it very soon.

If you've got a friend who's got a birthday coming up, buy their present from OK Comics now: help OK Comics through this hopefully temporary, difficult time. Don't let them go under through no fault of their own.

Check out their web site (www.okcomics.co.uk) for the latest events or follow them on Twitter or via facebook.com/OK-Comics